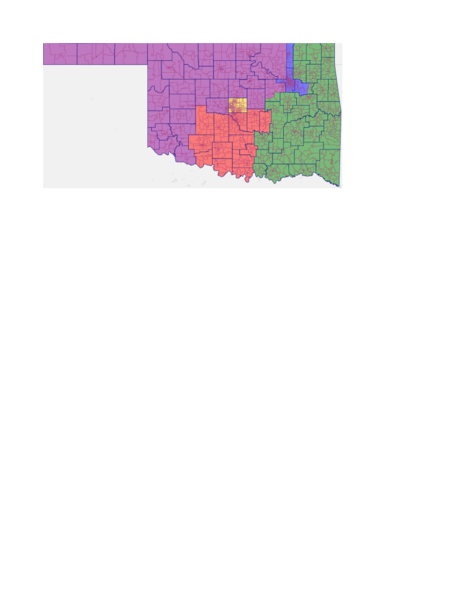 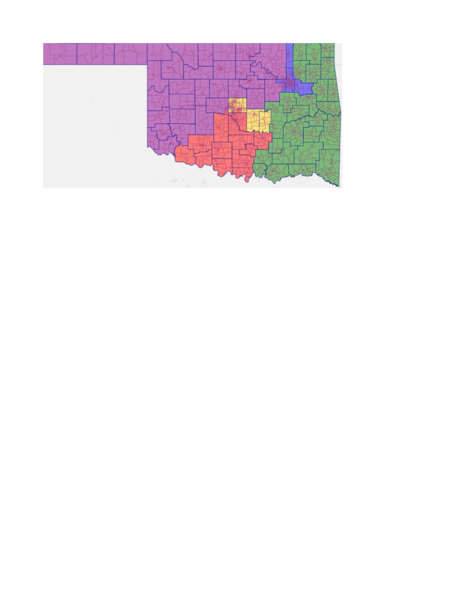 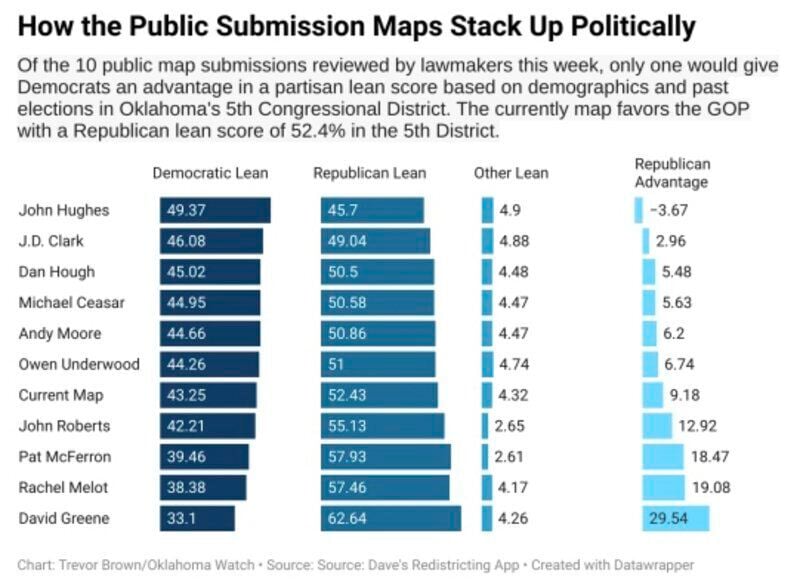 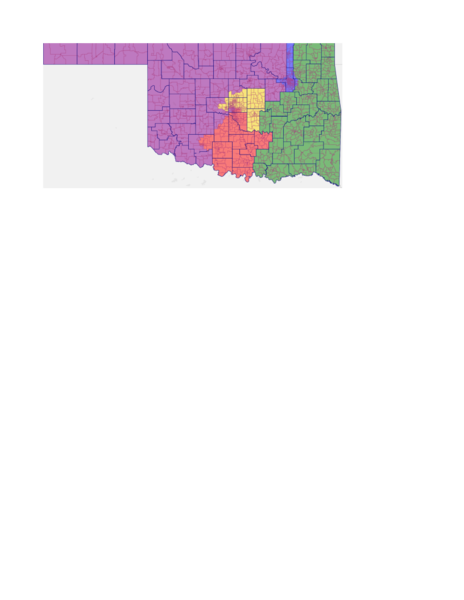 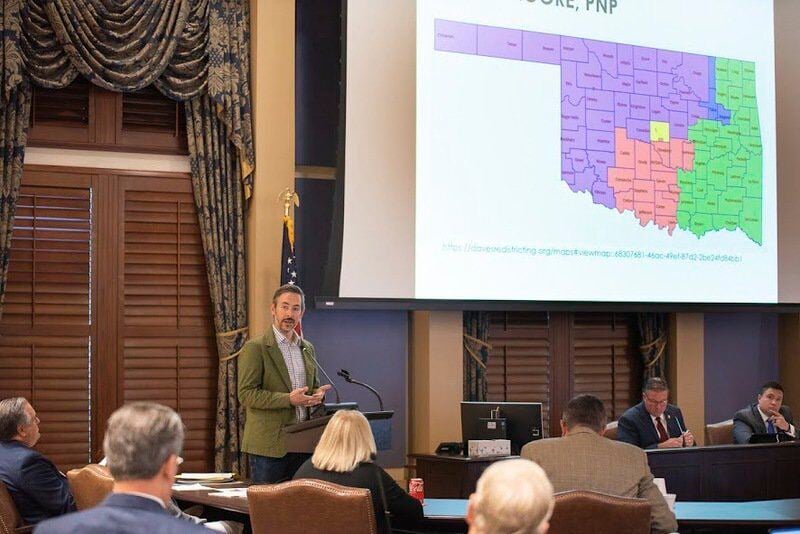 Andy Moore, executive director of People Not Politicians, discussed his proposed congressional redistricting map Tuesday at the Capitol during a meeting of the Legislature's joint Select Committee on Redistricting. (Whitney Bryen/Oklahoma Watch)

Andy Moore, executive director of People Not Politicians, discussed his proposed congressional redistricting map Tuesday at the Capitol during a meeting of the Legislature's joint Select Committee on Redistricting. (Whitney Bryen/Oklahoma Watch)

Oklahoma’s only competitive congressional district over the past decade could return to firm Republican control — or it could be changed to give Democrats the best chance they’ve seen in years.

State lawmakers will return to the Capitol on Nov. 15 for a special session to complete their once-every-decade redistricting work.

In addition to rewriting the boundaries for legislative districts, the Legislature is also tasked with creating a new map for the state’s five congressional seats.

Since Oklahoma’s population grew by 200,000 residents — with much of that 5% growth coming in urban areas around Oklahoma City and Tulsa — there will be some big changes for many residents.

Some proposed changes could dramatically shift Oklahoma’s political dynamics for the next decade.

“The key question is what they are doing with (U.S. Rep.) Stephanie Bice’s district,” said Michael Crespin, director of the University of Oklahoma’s Carl Albert Congressional Research and Studies Center. “I think if or how they are going to carve up Oklahoma City is something everyone is watching.”

Oklahoma’s 5th Congressional District, which currently covers most of Oklahoma County and all of Pottawatomie and Seminole, is the state’s only congressional district that has seen competitive races since 2012.

Democrat Kendra Horn broke a long-running GOP winning streak in the district in 2018 when she defeated incumbent Steve Russell with 50.7% of the vote. Bice retook the seat for the GOP in 2020 when she beat Horn with 52.1% of the vote.

With Democrats holding a 220-to-212 member advantage in the U.S. House of Representatives, the race holds importance beyond the state’s borders. Last election cycle, the Hill named the 5th District one of “10 bellwether House races to watch.” Depending on what lawmakers do with redistricting, it could again play a pivotal role in the 2022 mid-term elections.

State lawmakers began publicly discussing specific plans on how they will redraw congressional districts when they met Tuesday to review 10 map submissions from the public.

Six of the proposals would favor Democrats in the 5th District in a partisan lean score developed by Dave’s Redistricting App, a program the state partnered with to allow users to submit maps to the Legislature.

Others would split Oklahoma City into multiple congressional districts, breaking up a voting block that has been trending more Democratic and making it more difficult for Democrats to win based on current demographics.

This includes a map by Pat McFerron, a longtime GOP pollster and political consultant who has given nearly $15,000 to candidates since 2016.

McFerron’s plan would Oklahoma City into three congressional districts by:

Adjusting the 5th District so it covers most of central, northern and southeastern Oklahoma County, expands into Canadian and Logan counties and encompasses Lincoln County.

McFerron, who did not attend Tuesday’s meeting, included a statement saying his map focused on compactness and keeping whole counties together with limited splitting of precincts.

In addition to keeping the GOP strongly favored in the 1st, 2nd, 3rd and 4th Congressional Districts, McFerron’s map would build upon Republicans' advantage in 5th District. The Republican partisan lean there, currently at 52.4%, as defined by Dave’s Redistricting App, would move to 57.9%.

Only two of the other public submission maps would give Republicans a higher edge.

Although the Legislature’s redistricting committee passed guidelines stating that the political makeup of the districts should not be one of the criteria map writers consider, Crespin said that is likely on lawmakers’ minds.

Since Oklahoma is not among the 14 states with independent redistricting panels, the GOP-dominated Legislature will get the final say.

“The drawing of the map is always very political,” Crespin said. “Except in a few instances where they just use population, the maps are drawn more to get a political outcome more than anything.”

At least two lawmakers, however, expressed concern about proposals to split Oklahoma City.

"I have to ask if you don't think it's a little bit ridiculous that I might be driving through two or three different congressional districts from my house to the Capitol,” said State House Rep. Forrest Bennett, D-Oklahoma City. “I live five minutes from here.”

He and others also expressed concern that this would split up minority groups in Oklahoma, specifically the Hispanic population on the southside, in a way that could dilute their vote.

“I would say my argument against three districts touching Oklahoma County is that you can end up with four urban Congress people and only one representing rural Oklahoma,” she said. “So I would have the same objections (as Bennett), but for different reasons.”

The Greater Oklahoma City Chamber of Commerce is among those that support splitting up the state’s largest city into different congressional districts. Its argument is that if multiple representatives cover Oklahoma City, the city will gain influence in the U.S. House of Representatives.

What Do the Other Proposals Say

One map from David Greene, an Oklahoma City resident, sets out to create five “geodiverse” districts with each district containing some urban, suburban, rural and agricultural areas. This map, which likely won’t mirror the final plan passed by lawmakers, would have all five congressional districts cover parts of Oklahoma County.

This would give Republicans the biggest advantage in the 5th District of all the public submission maps. It would increase the Republican partisan lean to 62.6%.

Another plan from Rachel Melot, CEO of the Shawnee Chamber of Commerce known as Shawnee Forward, would keep Pottawatomie and Seminole counties in the 5th District by moving much of southwest Oklahoma County into Lucas’ 3rd District.

A proposal most closely mirroring the current congressional map came from Andy Moore, executive director of People Not Politicians, a group that unsuccessfully tried to get a state question on the 2020 ballot to create an independent and nonpartisan redistricting committee.

Moore’s plan would keep most of Oklahoma County in the 5th District with the exception of Tinker Air Force Base, which would remain in Cole's 4th District. His map would accomplish this by moving Pottawatomie and Seminoles to the 4th District.

“In drawing this map we sought to prioritize equal representation, fairness and honestly, common sense,” he said. “Our goals was to equalize representation between the districts, minimize splitting of counties, keeping communities of interest together whenever reasonable and possible to reflect existing natural and political boundaries.”

Moore’s proposal would slightly improve Democrats’ chances in the district. But the GOP would still hold a partisan lean score advantage of 50.9 to 44.7.

State House Rep. Ryan Martinez, R-Edmond, who is one of the chairs of the Legislature’s joint Select Committee on Redistricting, said a proposed map has yet to be finalized. He said lawmakers wanted to wait for the hearing on the public map submissions before proceeding.

The committee is expected to release their proposal “weeks” before the Nov. 15 session starts, he said.

Once the Legislature enters the special session, Martinez said the committee will vote on proposed congressional and state legislative district maps, which need to be redrawn now that the complete Census data has been delivered.

Whatever the committee advances is likely to win support of the Republican-led House and Senate. After that, it will go on to Gov. Kevin Stitt for his signature.

If Democrats or others think the map was unfairly drawn to give Republicans an advantage, Crespin said they likely have little recourse.

State and federal courts have been reluctant to override maps based on politics alone. Crespin said that unless the maps raise constitutional concerns or run afoul of the federal Voting Rights Act, gerrymandering along political lines is not explicitly illegal.

“Just because it looks funny or it helps strengthen Bice’s chances (in 2022), that’s not necessarily illegal or anything,” he said.

Trevor Brown has been an Oklahoma Watch reporter since 2016. He covers politics, elections, health policies and government accountability issues. Call or text him at (630) 301-0589. Email him at tbrown@oklahomawatch.org. Follow him on Twitter at @tbrownokc