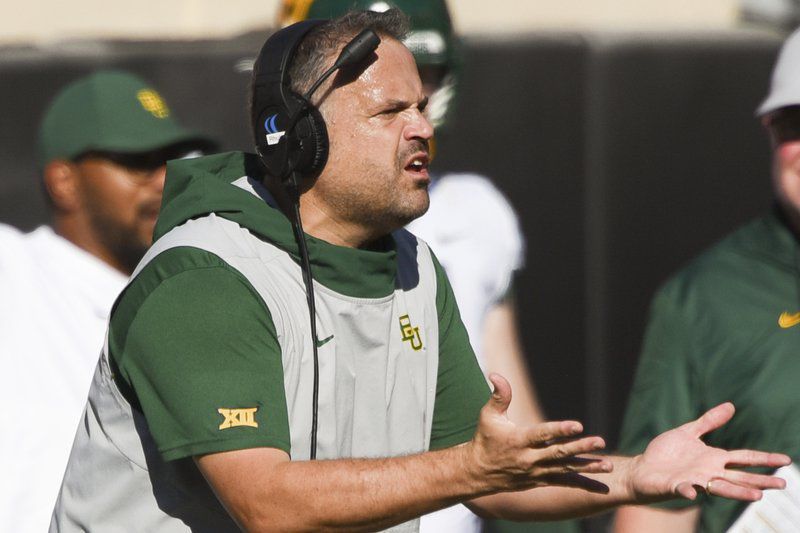 Baylor head coach Matt Rhule gestures to an official during the first half on Oct. 19 against Oklahoma State in Stillwater. Rhule and OU defensive coordinator Alex Grinch have gotten their hands dirty building new cultures at their respective schools, with Rhule's being challenge being more daunting. Now they will coach against each other in the Big 12 championship game. 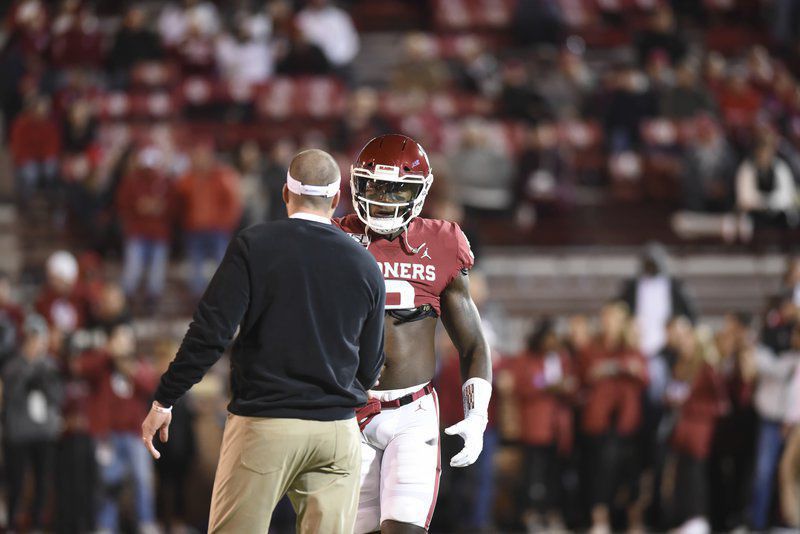 Oklahoma defensive coordinator Alex Grinch talks with Kenneth Murray before the Sooners' game against TCU, Nov. 23 at Owen Field. Grinch has led an impressive defensive turnaround at OU this season, with Murray as one of the key centerpieces.

Baylor head coach Matt Rhule gestures to an official during the first half on Oct. 19 against Oklahoma State in Stillwater. Rhule and OU defensive coordinator Alex Grinch have gotten their hands dirty building new cultures at their respective schools, with Rhule's being challenge being more daunting. Now they will coach against each other in the Big 12 championship game.

Oklahoma defensive coordinator Alex Grinch talks with Kenneth Murray before the Sooners' game against TCU, Nov. 23 at Owen Field. Grinch has led an impressive defensive turnaround at OU this season, with Murray as one of the key centerpieces.

When Matt Rhule was hired at Baylor three years ago to the day, he was not just a no-name coach from Temple. A year earlier, he’d turned down a job at Missouri. Within two years, the New York Jets would want him.

But then, he also wasn’t a household name yet.

At the time, Oklahoma linebacker DaShaun White was four-star linebacker prospect from North Richland Hills, Texas — less than two hours from where Rhule would hold court as the Bears’ head coach — and was verbally committed to Texas A&M.

When White chose to not sign with the Aggies during the December period, Rhule took his chances. He recruited White for the rebuild he was planning at Baylor.

White loved the pitch. He ultimately chose the Sooners, but was left with a good impression.

“I had a feeling they’d get that program turned around just because of the way he was,” White said. “I can’t really explain ti. It was something about Matt Rhule. He seemed like a real good guy. Something about him made people want to follow him.”

When No. 6 Oklahoma and No. 7 Baylor meet for the Big 12 title on Saturday at AT&T Stadium, it’s the culmination of two rapid reconstructions that have taken place at each school.

White now starts for an OU defense that went from the Big 12’s worst-ranked total defense to its best in one year’s time. The changes have been stark under defensive coordinator Alex Grinch.

At Baylor, Rhule took on even bigger challenges. The university had been paralyzed by its own mistakes during the sexual assault scandal that preceded Rhule. Previous coach Art Briles was revealed to have maintained a culture with little oversight for allegations of violence against women. The fallout caused an overhaul on the coaching staff and with high-ranking school administrators.

Most of Briles’ 2017 verbal commitments said thanks but no thanks to Rhule. They left one by one. The only player who stayed on with Rhule in the class was linebacker Jalen Pitre.

But the vibe Rhule had left with White was felt by others. Both James Lynch, now Baylor’s career sack leader and the Big 12 defensive player of the year, and starting quarterback Charlie Brewer signed that year.

John Werner has worked as a sports writer at the Waco Tribune-Herald since 1982 and began covering the Baylor football beat in 2008. The media corps in Waco gave an honest look at the situation after Rhule went 1-11 in his first season.

“You were wondering, wow, this is probably more of a rebuilding job than we even thought,” Werner said. “He was working with a very thin roster.”

Then came a 7-6 campaign in 2018 and a bowl win over Vanderbilt. Suddenly, nine wins this season seemed like a possibility. Now, Rhule has Baylor sitting with an 11-1 record and a pulse within the College Football Playoff race.

The one loss is to OU back in November, when the Bears had the Sooners pinned down 28-3 before an epic second-half comeback. It was played before a sellout crow that filled McLane Stadium with electricity.

Rhule and Grinch, who was hired last offseason after Lincoln Riley dismissed former defensive coordinator in the middle of the 2018 season, faced different challenges. But both drew up new culture from scratch.

Baylor fans have had to get accustomed to Rhule’s emphasis on defense. The Bears don’t trapeze their way into the end zone anymore, but defensive coordinator Phil Snow has brought the program balance — a lot like Grinch.

“Nothing has been easy about the first couple years here,” Rhule said. “I would say it was really, really hard. A lot of credit to our players for hanging in there and battling through and not quitting, not giving up, not losing hope.”

Rhule lauds Baylor athletic director Mack Rhoades for his involvement. Rhoades is at practice, in the coaching offices, front and center for anything needed.

Riley has been there for Grinch too, throwing maximum energy into the defensive rebuild. Riley calls offensive plays but isn’t buried in a clipboard during big defensive possessions. After a late fourth-down stop at Oklahoma State last week, his fist-swinging reaction was the most noticeable on OU’s sideline.

The Sooners are trending up again defensively after a midseason lull, the kind Grinch had been cautious about in the preseason. When Iowa State and TCU overcame big deficits against OU, he began reminding players the work is never done. He tried hypnotizing them with the mantra “three-and-out, takeaway.”

The idea being, scores never matter.

Grinch would repeat random scores — combining actual Powerball numbers — and ask players to respond with what the scenario called for defensively.

Finally, most of them responded correctly: Three-and-out, takeaway.

“I think they're starting to embrace it because it's real, you can't punch holes in it,” Grinch said. “You have a chance to have real-world examples and not coach speak. Football's hard, so it's not like you're ever there. It's constant.”

Shanna Lynn (Fleener) Seyler, 37, passed away unexpectedly Saturday, January 18, 2020 at Alliance Health Woodward. Shanna was born October 9, 1982 in Greensburg, Kansas the daughter of J.Wynn and Diana Lynn (Crawford) Fleener. She was a 2001 graduate of Greensburg High School and attended Ka…