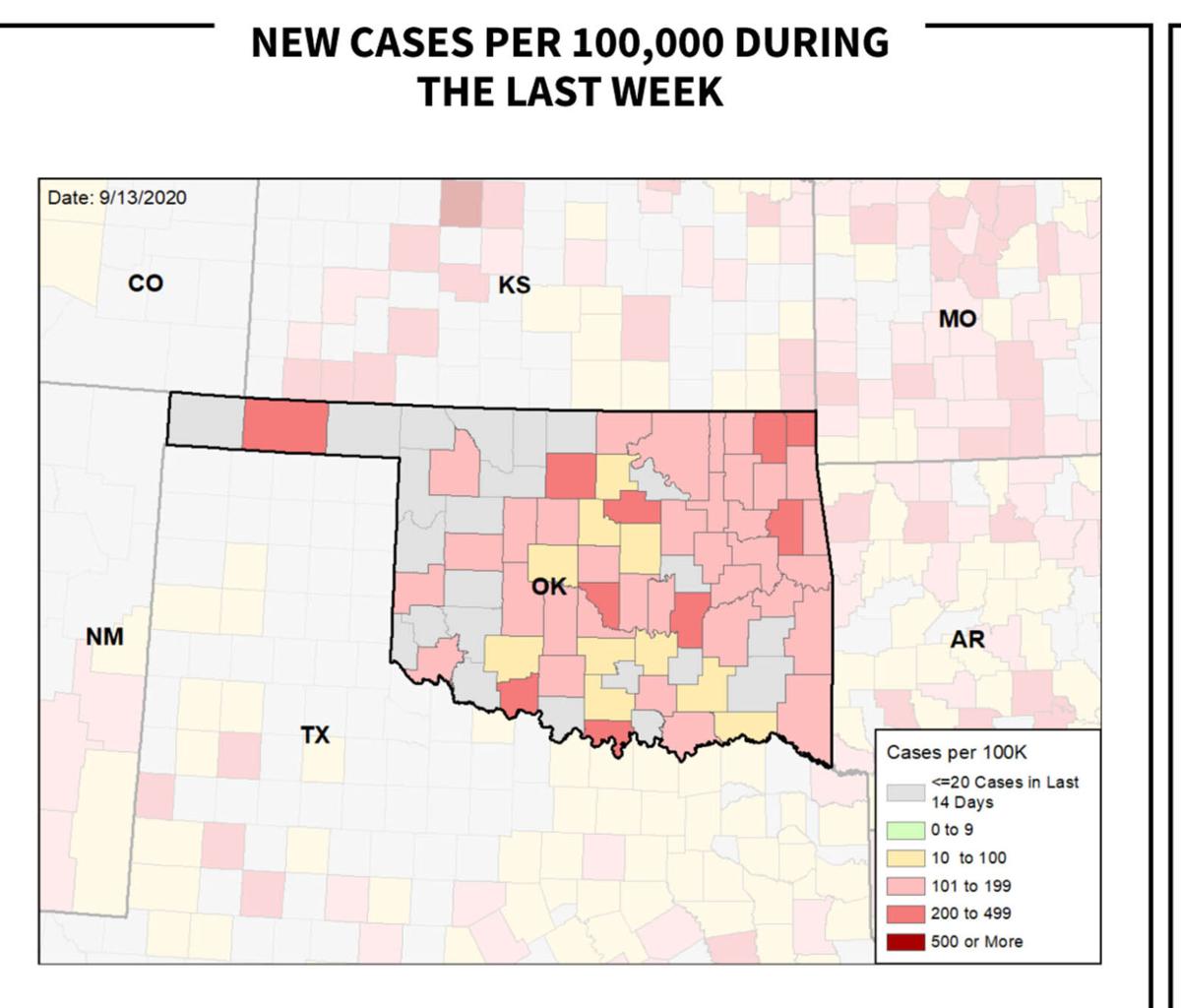 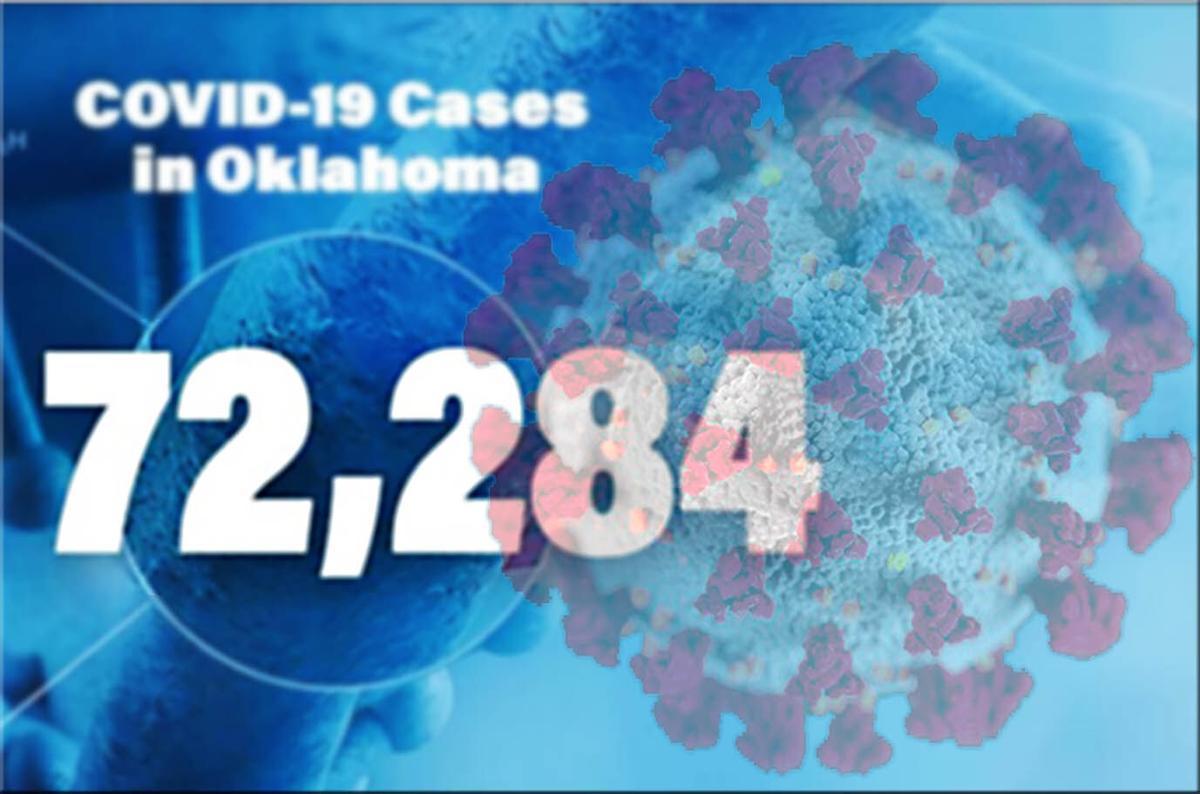 ENID, Okla. — Twelve more deaths and 970 cases were confirmed by the state Health Department, Wednesday, as Oklahoma moved to the 5th-highest state per rate of new cases in the nation, according to the latest White House Task Force report.

The 1.4% increase in case totals brings the state's overall figure to 72,284 confirmed positive for the virus since March, according to the Oklahoma State Department of Health. There have been 924 deaths in which COVID-19 was the cause or a main contributor, according to OSDH.

Of the deaths reported Wednesday, 11 were in the 65 and older age group, a man and woman each in Canadian, Oklahoma and Tulsa counties, two women in Muskogee County, men in Johnston and Nowata counties and a Cotton County woman. The death of a Canadian County woman in the 50-64 age group also was reported by OSDH.

In Enid, Integris Bass Baptist Health Center reported a patient who had tested positive for COVID-19 died Tuesday. Deaths are confirmed through the OSDH before they are included on the official reports for Oklahoma.

As of Wednesday St. Mary's Regional Medical Center was treating 11 patients who had tested positive for COVID-19, while Bass had seven, according to spokeswomen. There were 38 hospitalizations of patients who had or were suspected of having the virus in the Northwest region of Oklahoma, according to Tuesday's Executive Report.

Other Northwest Oklahoma county case increases on Monday were seven in Woodward, three each in Grant and Kingfisher, two each in Noble and Woods and one in Major. Case increases in cities and towns included six in Woodward; two each in Alva, Billings, Fort Supply and Nash; and one each in Burlington, Meno, Marshall, Medford, Seiling, Cashion, Ringwood and Garber. Ames saw a reduction of one case.

Oklahoma remains on the White House task force red zone for COVID-19 cases, with more than 100 cases per 100,000 population, but has seen stability in the number of new cases and a decrease in the rate of positive tests, according to the latest report released Wednesday. 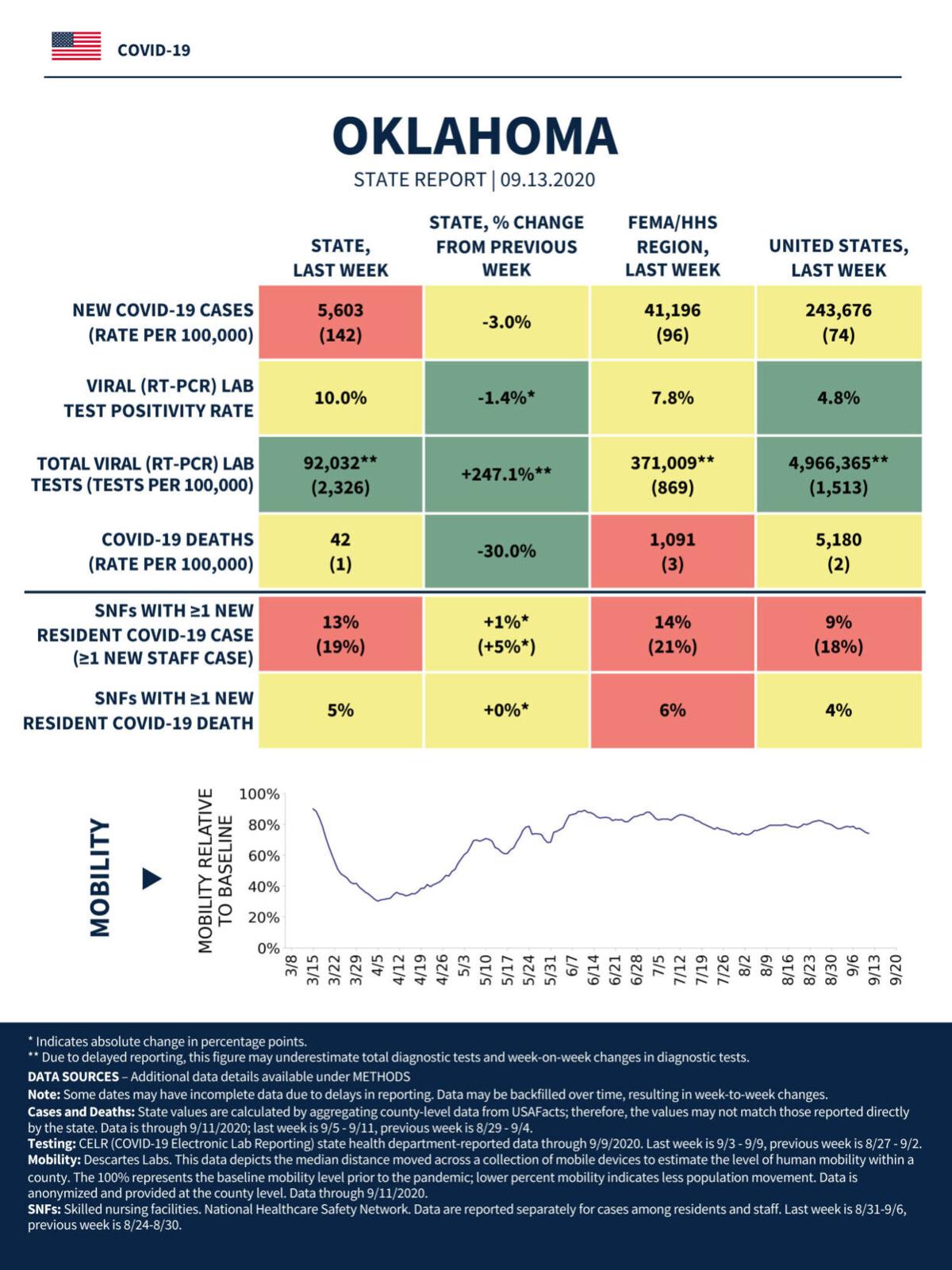 Enid and Garfield County remain in the top 12 red zone cities and towns in Oklahoma. Other counties in the red in Northwest Oklahoma include Blaine, Kingfisher and Woodward.

Sixty-five percent of all counties in Oklahoma have moderate or high levels of community transmission, according to the report.

The task force still recommends a statewide mask mandate, as COVID-19 community transmission is occurring, and monitoring schools, long-term care facilities and other congregate living settings such as prisons.

Of those Oklahomans testing positive, 38,095 have been women and 34,129 have been men. There were 60 listed as unknown gender, according to OSDH data on Wednesday.

Data shows deaths in 64 of Oklahoma's 77 counties, with 178 in Oklahoma County; 149 in Tulsa County; 68 in Cleveland County; 46 in Rogers County; 40 in Washington County; 32 in McCurtain County; 29 in Creek County; 23 each in Delaware and Wagoner counties; 21 in Muskogee; 20 in Caddo County; 19 in Pittsburg County; 17 in Garfield County; 16 in Canadian and LeFlore counties; 13 each in Kay and Osage counties; 12 in Comanche County; 10 each in Adair, Jackson and Mayes counties; nine each in Lincoln, Pottawatomie and Sequoyah counties; eight each in Carter, Greer, and Texas counties; seven each in Cherokee and Grady counties; six in McClain; five each in Okmulgee, Payne, Seminole and Stephens counties; four each in Bryan, Garvin, Haskell, Hughes, Johnston, McIntosh, Okfuskee and Ottawa counties; three each in Cotton, Nowata, Pawnee and Pontotoc counties; two each in Choctaw, Kingfisher, Kiowa, Latimer, Noble and Tillman counties; and one each in Atoka, Beckham, Blaine, Craig, Dewey, Logan, Love, Major, Marshall, Murray, Pushmataha and Roger Mills counties.

In Enid, there have been 704 cases, with 534 recovered and eight deaths from the 73701 ZIP code, primarily the eastern half of the city, and 588 cases, with 453 recovered and nine deaths from 73703, or the western half, according to OSDH data on Wednesday. There also has been one recovered case in the 73705 ZIP code, which is listed as Vance Air Force Base at https://www.unitedstateszipcodes.org/.

State Health Department officials are encouraging Oklahomans to get tested for COVID-19, saying recently that due to adequate supplies, residents no longer need to exhibit symptoms or report exposure to someone with the virus to get in line for testing.

Emergency warning signs for COVID-19 are trouble breathing, persistent pain or pressure in the chest, new confusion or inability to arouse, bluish lips or face, according to the CDC. More information can be found at https://www.cdc.gov/coronavirus/2019-ncov/symptoms-testing/symptoms.html.

Those with symptoms of COVID-19 should call ahead to local emergency rooms. Those with minor symptoms should contact their regular physicians.

Resources and information on COVID-19 can be obtained by calling 211 or going to https://covidresources.ok.gov/.

BREAKING NEWS on the COVID-19 threat and its impact is available at https://www.enidnews.com/virus and is free for all readers. That includes information on closings and cancellations.

Get full-access breaking news via text alerts at https://enidnews.com/textalerts.

•• All breaking news is fully accessible on the Enid News & Eagle website.

•• Information also can be found at https://coronavirus.health.ok.gov/ and https://www.cdc.gov/.

Have a question about this story? Do you see something we missed? Do you have a story idea for the News & Eagle? Send an email to enidnews@enidnews.com.