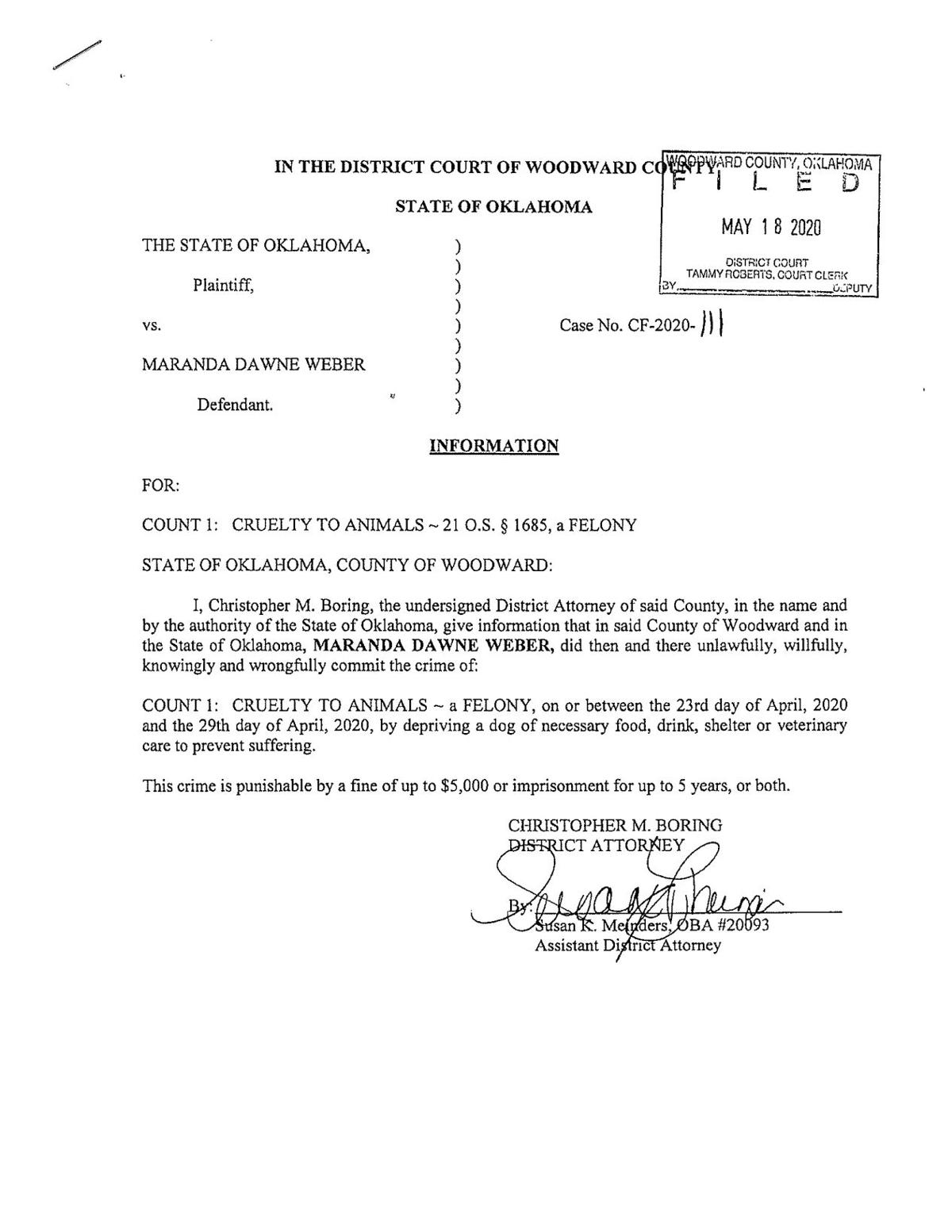 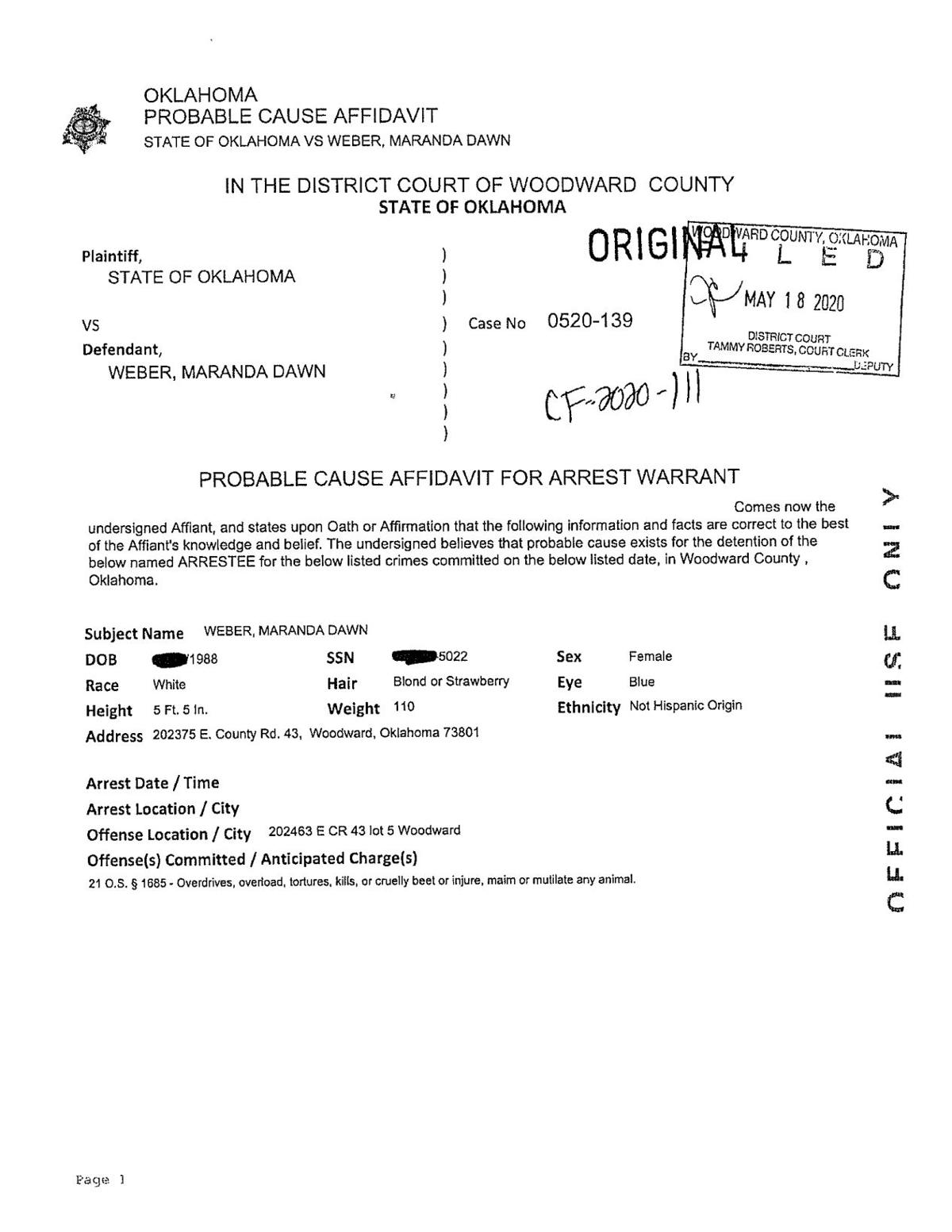 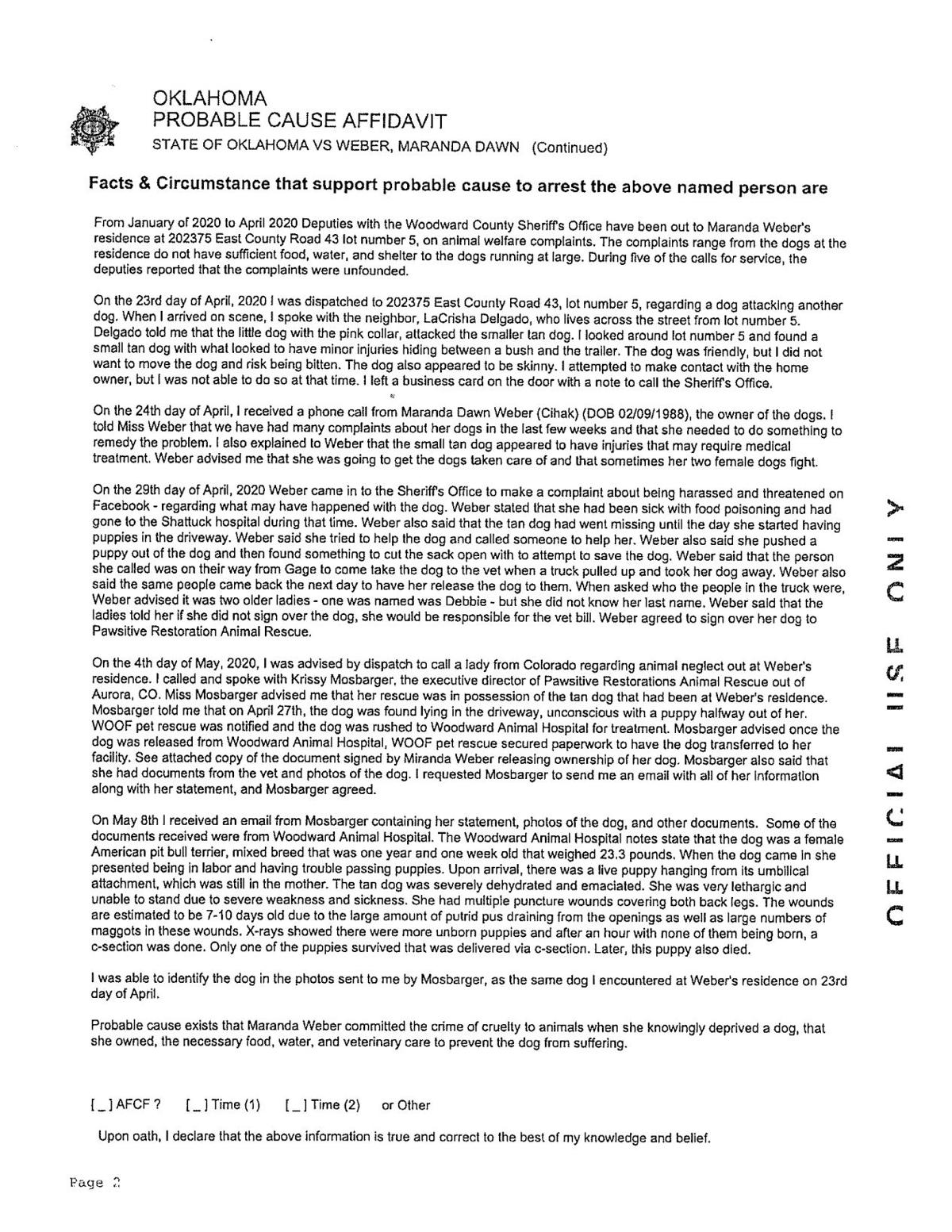 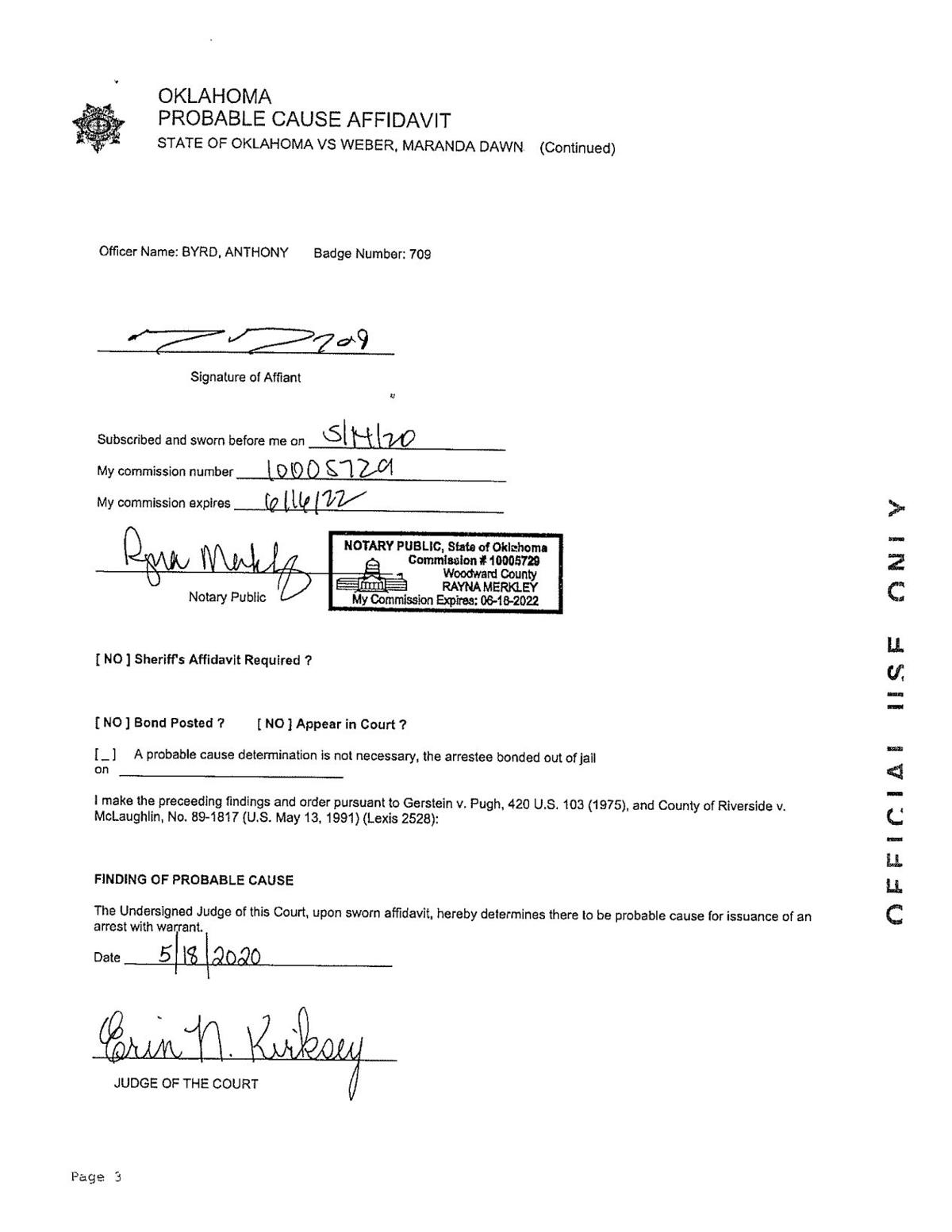 Charges have been filed in the case of Annie, a rescued pitbull mix dog found in labor, severely dehydrated and barely responsive, and taken to Woodward Animal Hospital for treatment and an emergency cesarean section.

Maranda Dawne Weber was charged Monday in district court with the felony of cruelty to animals on or between April 23 and April 29 by depriving Annie of necessary food, drink, shelter or veterinary care to prevent suffering. According to court records, this crime is punishable by a fine of up to $5,000 or imprisonment for up to 5 years, or both.

According to the probable cause affidavit, deputies of the Woodward County Sheriff’s office have been to Weber’s residence on animal welfare complaints ranging from dogs not having sufficient food, water and shelter to dogs running at large.

On April 23, Deputy Anthony Byrd was dispatched to the residence regarding a dog attacking another dog. After looking around the area, he found a small tan dog hiding between a bush and the residence. Although the dog was friendly, he did not want to move the dog and risk being bitten, according to the affidavit.

Byrd left a business card on the door of the residence with a note to call the sheriff’s office. Weber called the office the next day and was informed of complaints received over the last few weeks. She was informed that she needed to do something to remedy the problem. Byrd also explained the small tan dog appeared to have injuries that may require medical treatment.

On April 29, Weber went to the sheriff’s office to make a complaint about being harassed and threatened on Facebook regarding what may have happened with the dog. Weber said she had been sick with food poisoning and the dog had gone missing until the day Annie was found in the driveway having puppies, according to the affidavit.

Weber, according to the affidavit, said she tried to help the dog and called someone to help her. Before the person she called arrived, Weber said a truck pulled up and took the dog away. She said the same people (WOOF Pet Rescue) came back the next day to have her release the dog to them. Weber said the two ladies told her that if she did not sign over the dog she would be responsible for the vet bill. Weber said she agreed to sign the dog over to Pawsitive Restoration Animal Rescue.

The puppies all eventually died and Annie is in the care of the rescue organization in Colorado.

According to the affidavit, on May 8 after receiving pictures and documentation from Krissy Mosbarger with Pawsitive Restorations, Byrd was able to identify the dog as the same one he had encountered at the residence.

Some of the documents sent to Byrd by Pawsitive Restorations were notes from The Woodward Animal Hospital showing the dog was severely dehydrated and emaciated, according to the affidavit. The notes also showed the dog was unable to stand due to severe weakness and sickness and had multiple puncture wounds covering both back legs. The wounds were estimated to be 7 to 10 days old due to the large amount of pus draining from the openings as well as large numbers of maggots in the wounds, according to the affidavit.

Byrd said in the affidavit probable cause exists that Weber committed the crime of cruelty to animals when she knowingly deprived a dog that she owned of the necessary food, water and veterinary care to prevent the dog from suffering.

An bench warrant for Weber was issued by the district court with a bond of $10,000. Tuesday afternoon Weber was taken into custody at the Woodward County Jail.

34, former Woodward resident died on Monday, June 1, 2020 in Mustang. Memorial services will be held at the Billings Funeral Home Chapel at 2:00 p.m. on Monday, June 8, 2020. For full obituary see www.billingsfuneralhomewoodward.com

TRACY LAVONNE KROBER (NANA) AUGUST 15, 1964- APRIL 17, 2020 Tracy Lavonne Harrington Chase Krober, (55), passed from this life on Friday April 17, 2020, after a long battle with cancer. She was surrounded by her son, Lewis Chase III, daughter-in-law, sister-in-law and five of her grandchildr…