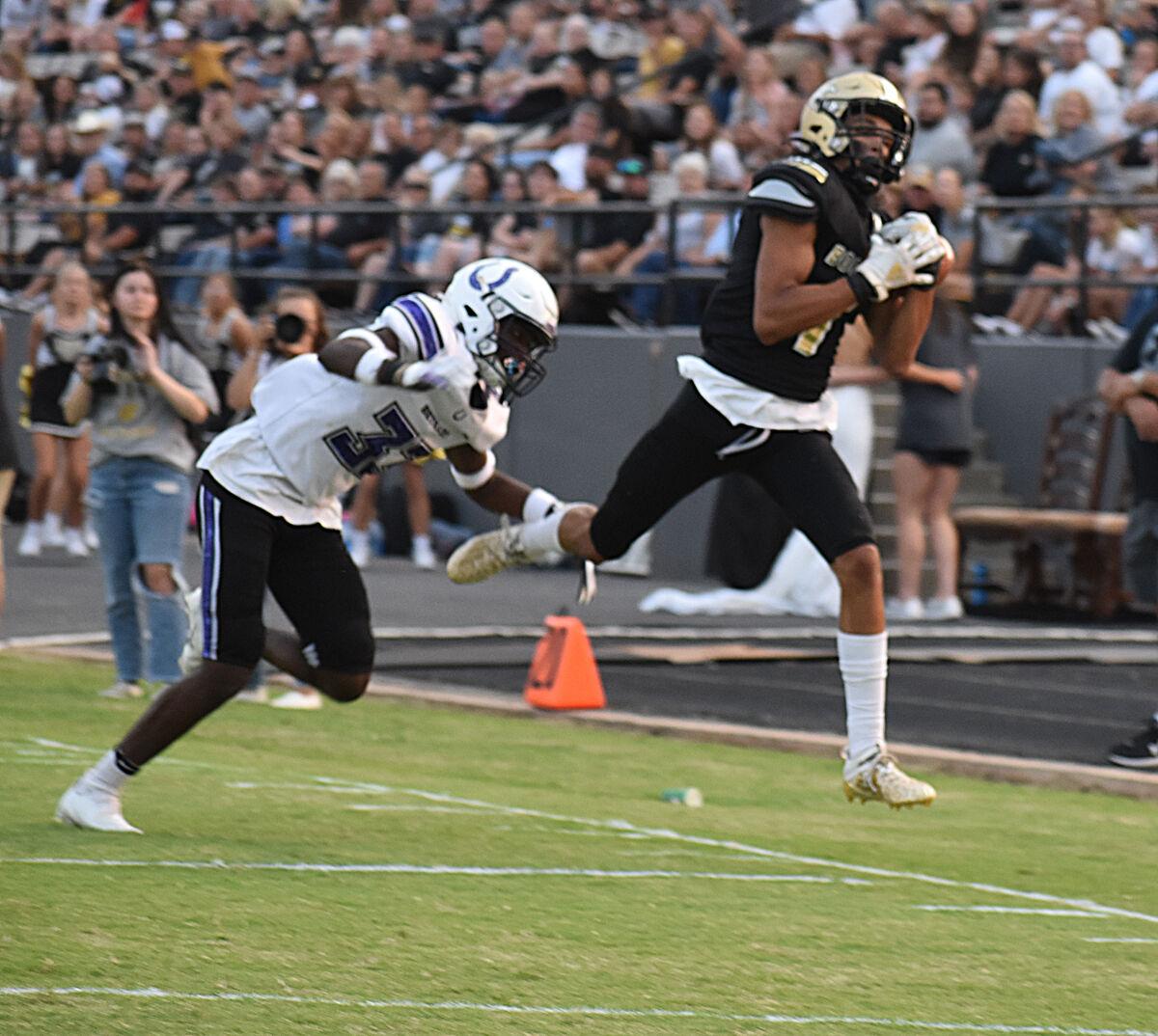 Taelen Laird goes up to catch a 35-yard touchdown pass from Wyatt Pope and give the Boomers a 7-0 lead against Bethany on Friday. Woodward went on to win the game 17-12 and even its season record at 1-1. (Photo by Johnny McMahan) 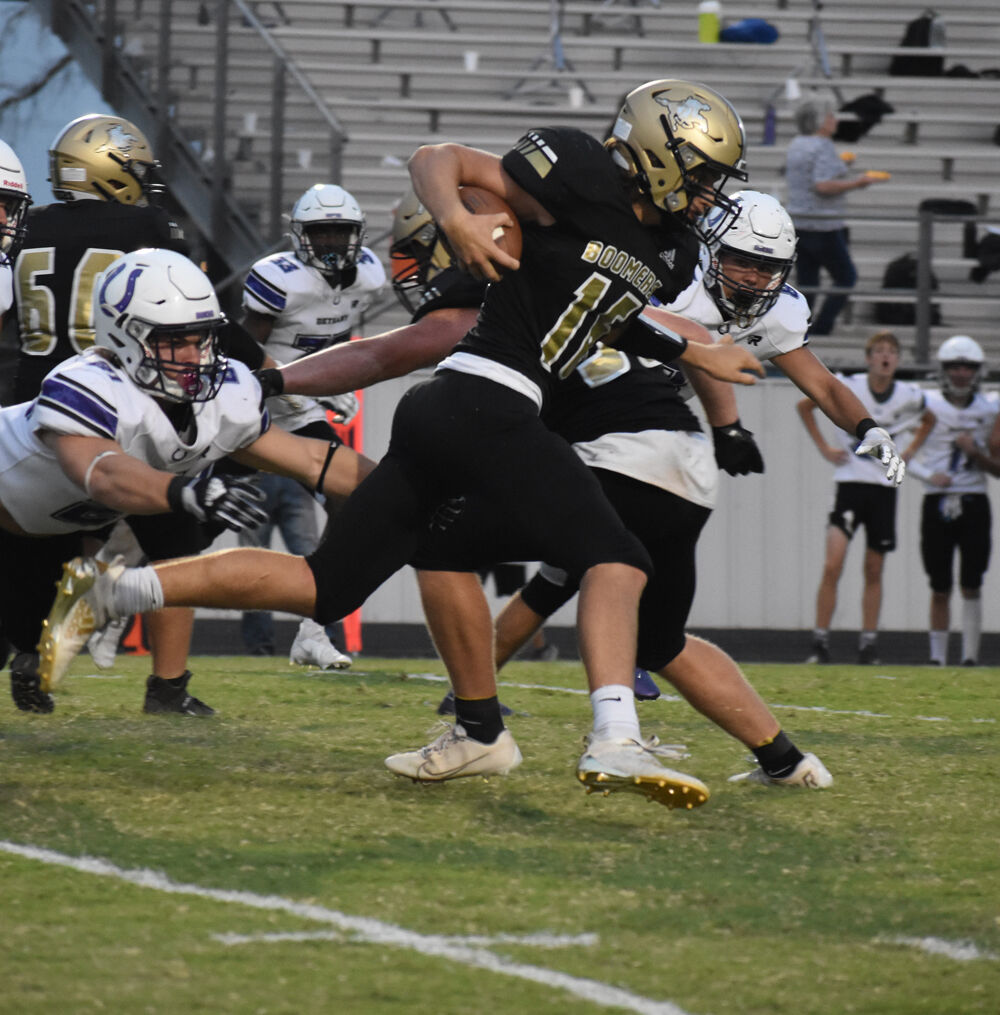 Wyatt Pope runs for some yardage against Bethany on Friday. Pope had a rushing touchdown and threw a touchdown pass in Woodward's 17-12 homecoming victory. (Photo by Johnny McMahan)

Taelen Laird goes up to catch a 35-yard touchdown pass from Wyatt Pope and give the Boomers a 7-0 lead against Bethany on Friday. Woodward went on to win the game 17-12 and even its season record at 1-1. (Photo by Johnny McMahan)

Wyatt Pope runs for some yardage against Bethany on Friday. Pope had a rushing touchdown and threw a touchdown pass in Woodward's 17-12 homecoming victory. (Photo by Johnny McMahan)

A mixture of a strong running game and a bend but don't break defense carried the Boomers to their first win of the season Friday night.

Before a large, loud homecoming crowd at Boomer Stadium, the Boomers beat Class 4A top 10 Bethany 17-12. It was Bethany's first loss after starting 2-0.

Woodward, 1-1, never trailed, leading 7-3 at halftime and putting the game away with a masterful 15-play, 84-yard drive in the late third period and fourth quarter that used up almost eight minutes of time.

Wyatt Pope, filling in at quarterback for Sam Cheap who missed the game with an injury, had a strong night, completing 5 of 7 passes for 99 yards and a touchdown, and running for 58 yards on 19 carries and another score. Nash Hunter added 69 yards on 17 carries, punishing the Bethany defenders with each run.

On defense, the Boomers gave up some big plays but kept the Bronchos out of the end zone until the final 90 seconds of the game. Woodward also had a pair of takeaways that stopped Bethany threats.

One of those came on Bethany's opening possession. The Bronchos drove to a third and goal at the Boomer seven, when Luke Shirkey picked off a Taylor Heim pass in the end zone.

The Boomers responded with an 80-yard scoring drive on their initial possession.

Pope and Taelen Laird teamed up on a 32-yard gain early in the drive, then connected again for the touchdown on a 35-yard play. Daniel Pinckard's extra point made it 7-0 with 52 seconds remaining in the first quarter.

Bethany missed a field goal on its next possession, but after a short Boomer punt, got on the board with a 30-yard field goal 6:09 before halftime.

Neither team had a serious threat the rest of the half, though the Bronchos missed a 50-yard field goal try on the final play.

The Boomer running game took over in the third period. Using runs by Pope and Hunter, the Boomers took almost six minutes off the clock and got a 36-yard field goal from Pinckard to make it 10-3.

Woodward proceeded to go 84 yards on its next possession for a commanding 17-6 lead.

Most of the yards came on the ground, though Pope hit Laird for an 18-yard gain and Parker Schmitz for eight yards. Other key plays were a nine-yard run by Hunter and 12-yarder by Pope.

On fourth and goal from the one, Pope got into the end zone with a strong second effort. Pinckard added the extra point.

Bethany tried to answer, reaching the Boomer five but a fumble out of the end zone gave the Boomers the ball back at their 20.

After a punt, the Bronchos broke through on a 15-yard touchdown pass by Heim. A two-point conversion failed and it was 17-12 with 1:21 remaining in the game.

Bethany tried an onside kick, but the Boomers recovered and ran out the clock to celebrate a homecoming victory.

Woodward will finish up the non-district portion of its schedule next Friday, going on the road for the first time this season to face Weatherford, another ranked team in Class 4A. Weatherford is 2-0 after getting a forfeit from El Reno due to COVID-19 issues. The Eagles beat Kingfisher in their season opener.

Here are some area scores from Friday.

May 7, 1946-October 11, 2021 Patricia's wishes were to be cremated. No services are currently planned. She will be buried at a later date in Woodward Cemetery. Arrangements are under the direction of Henninger-Hinson Funeral Home. www.enidwecare.com