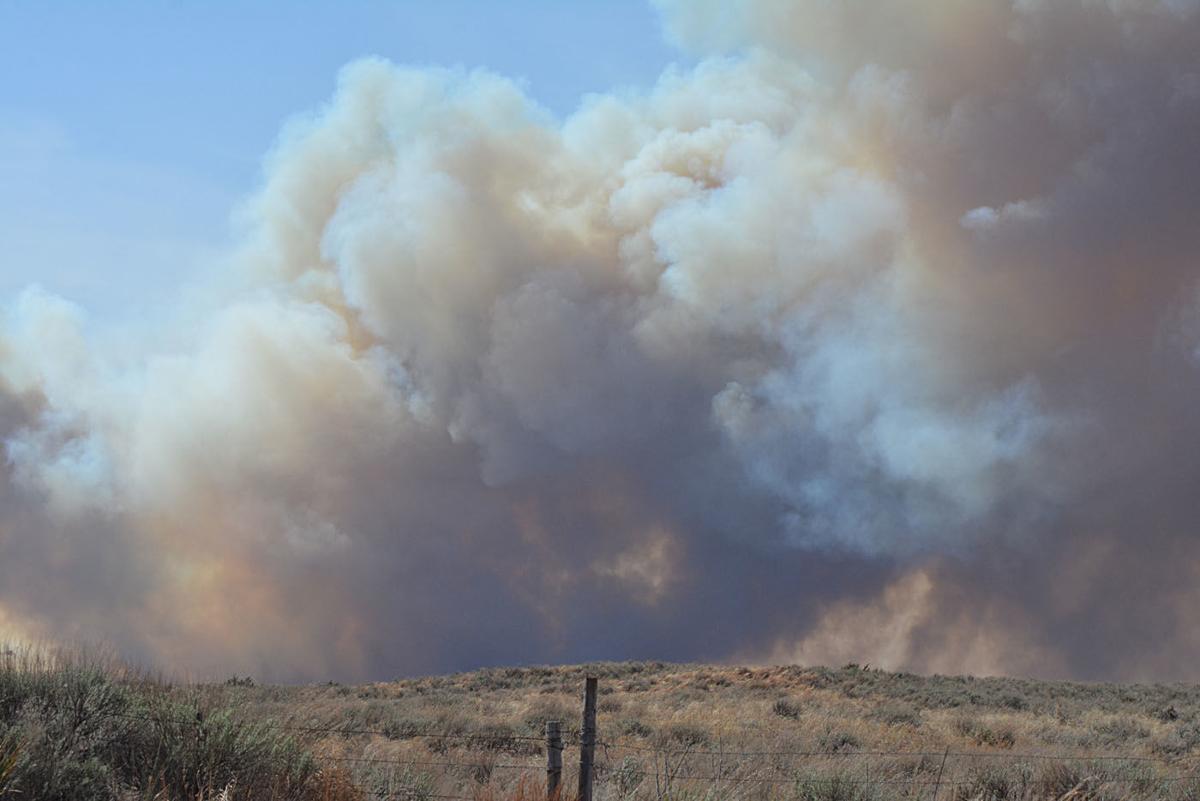 Fires were burning across much of western Oklahoma on Thursday evening. 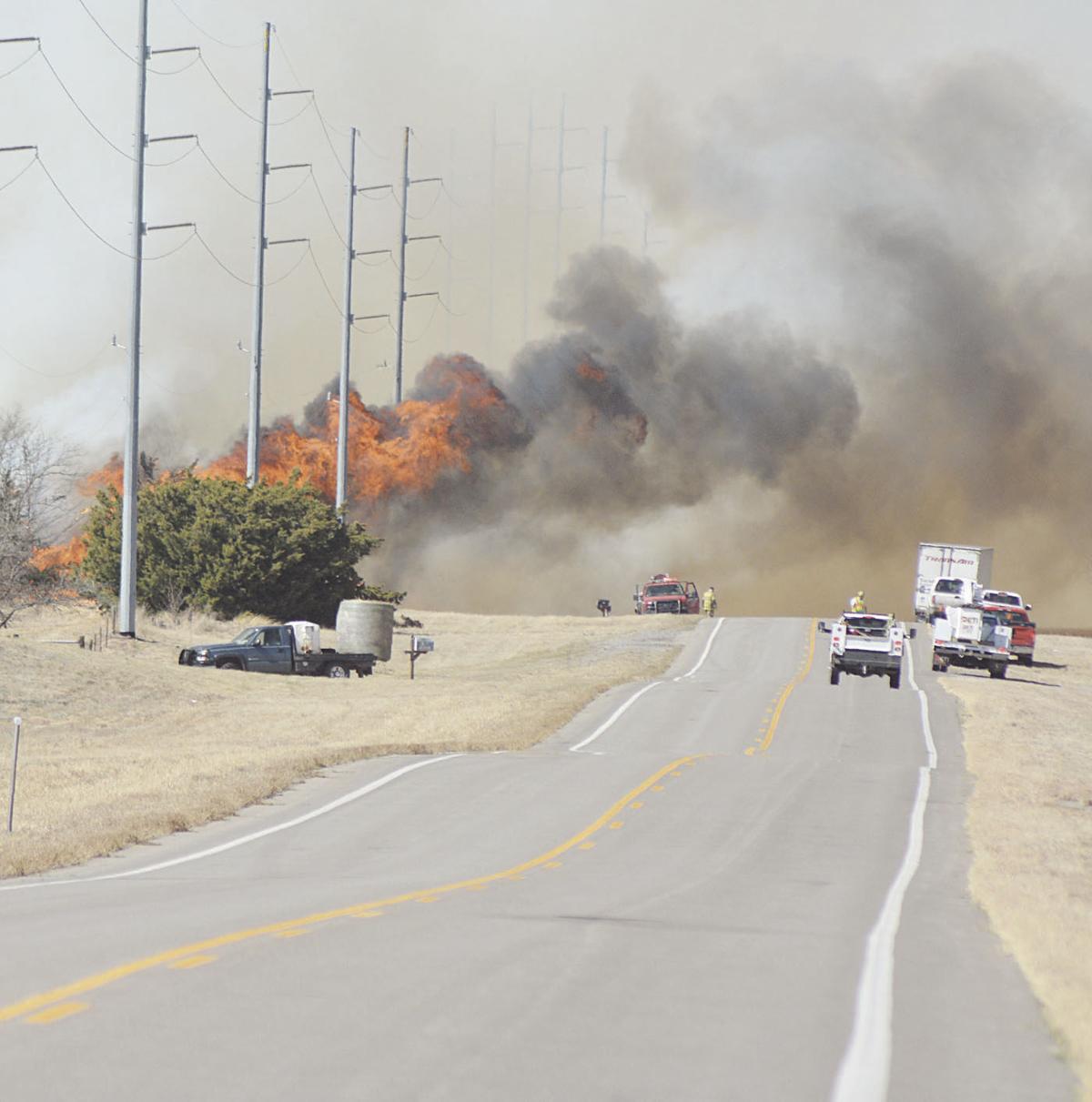 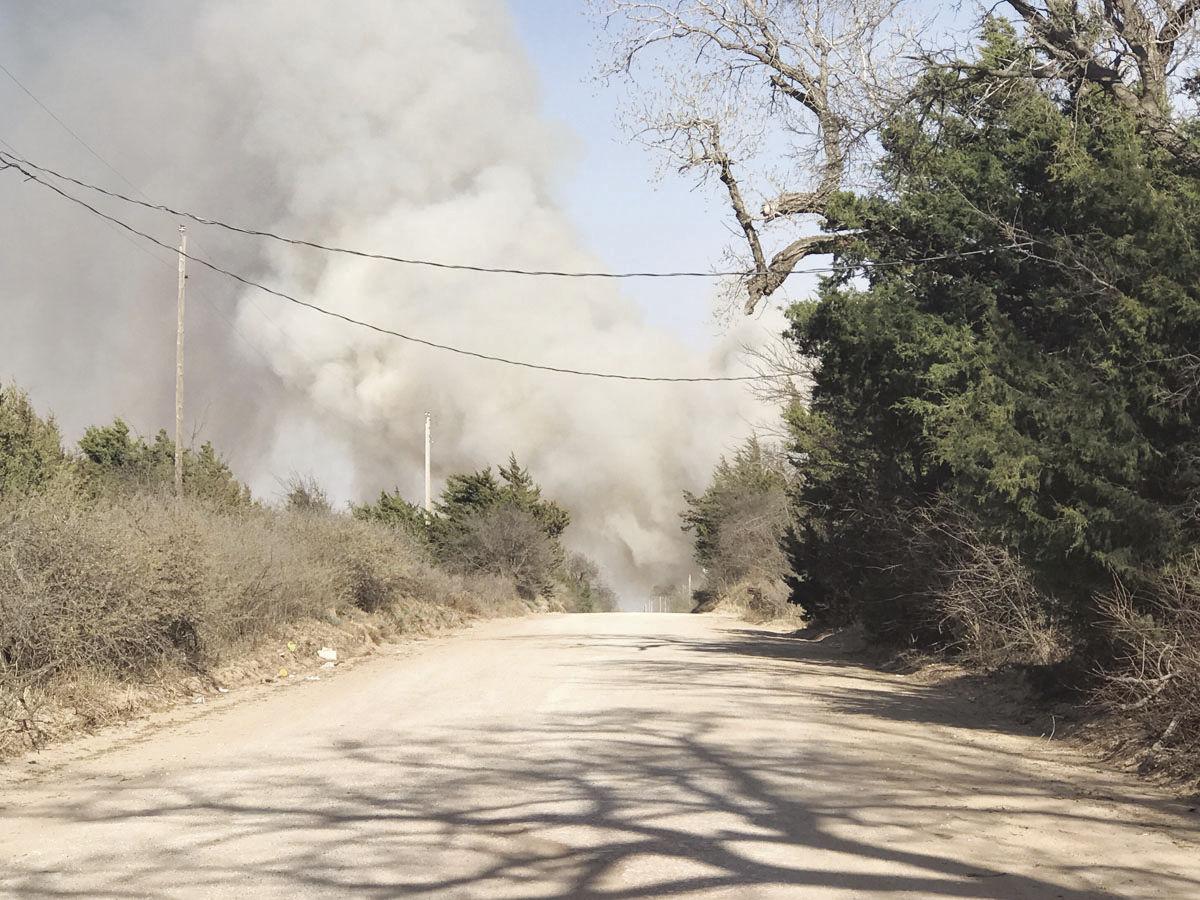 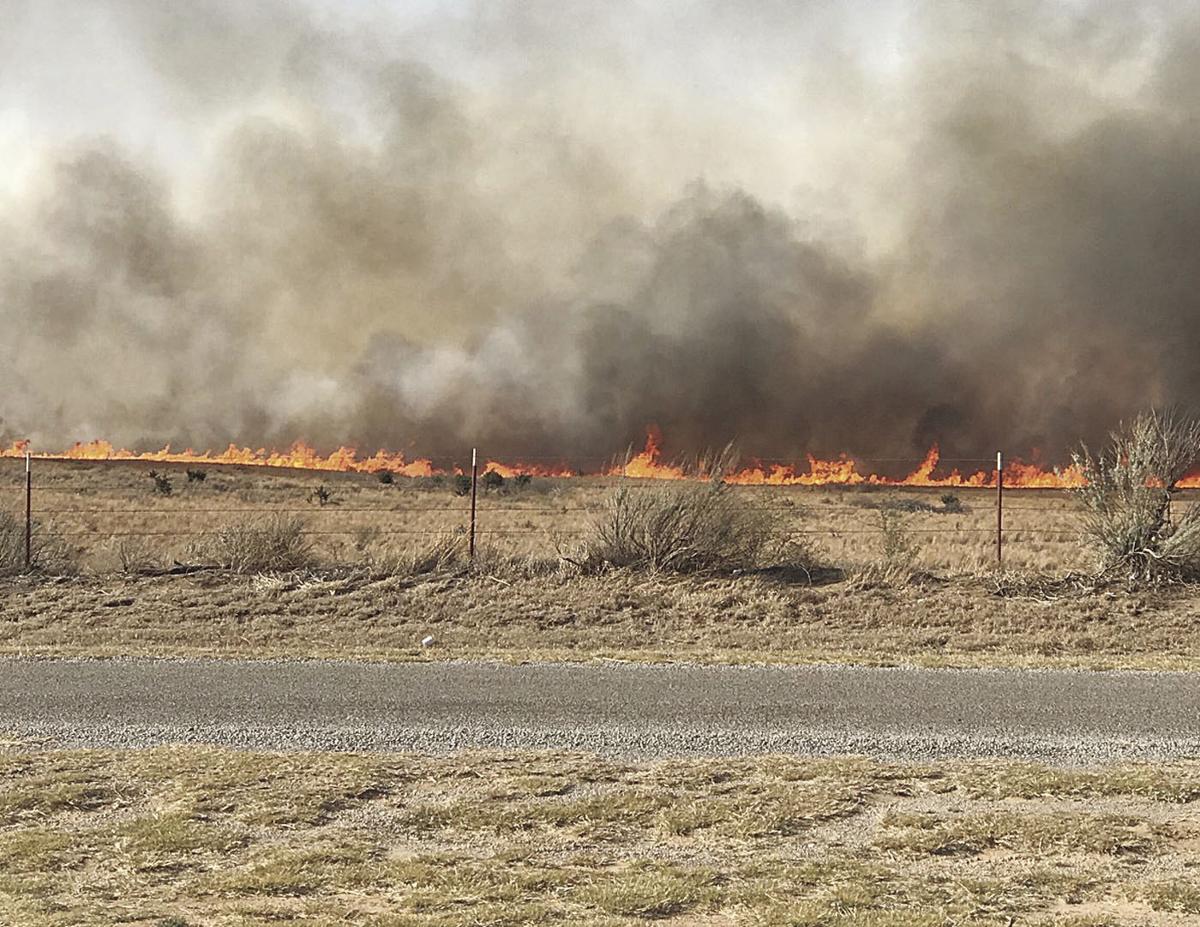 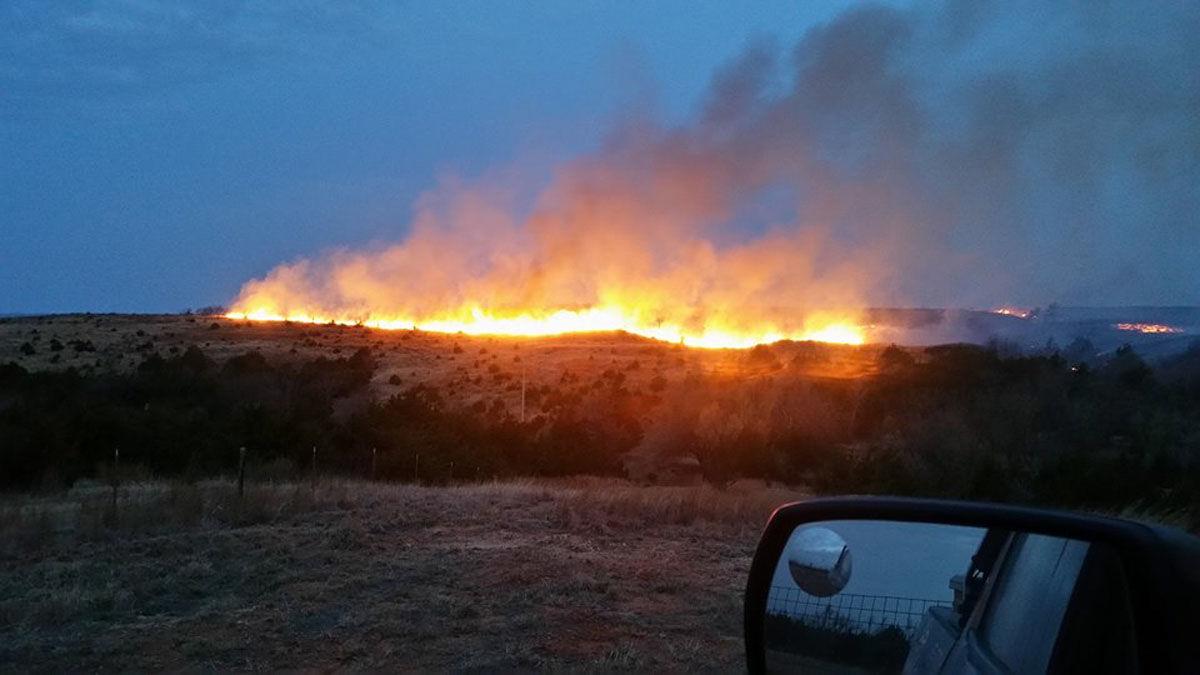 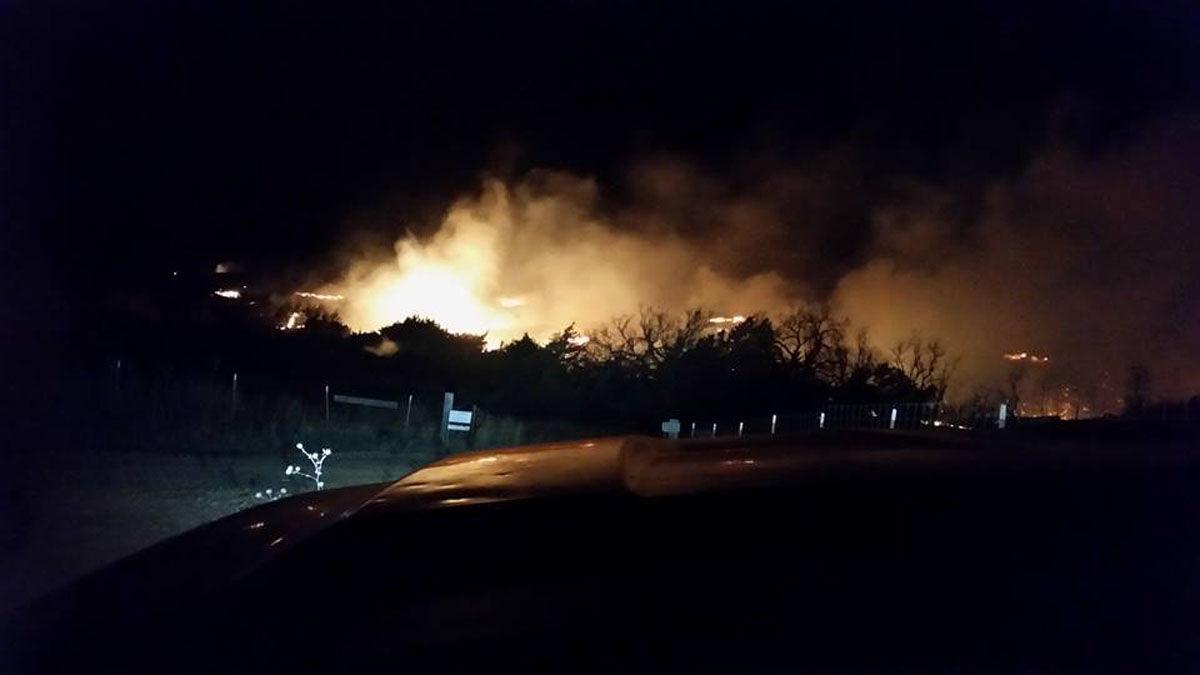 A look at the fire by Vici. (Photo provided by Marty Logan, news9.com) 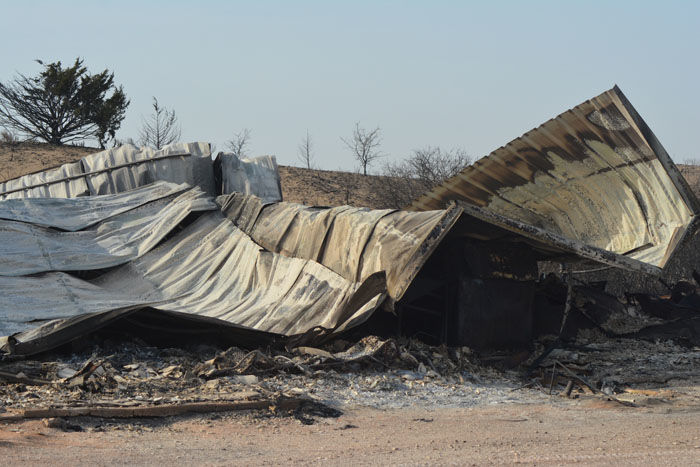 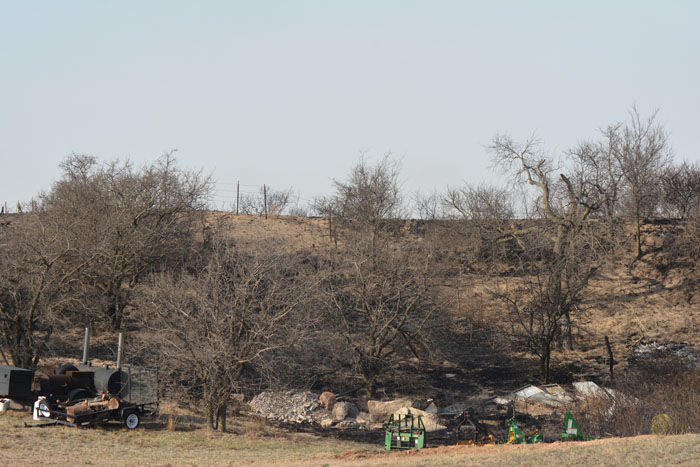 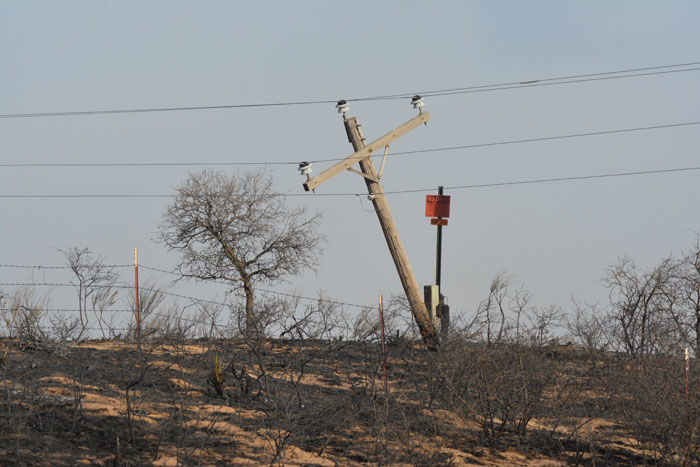 Some of the damage from the fire north of Woodward. 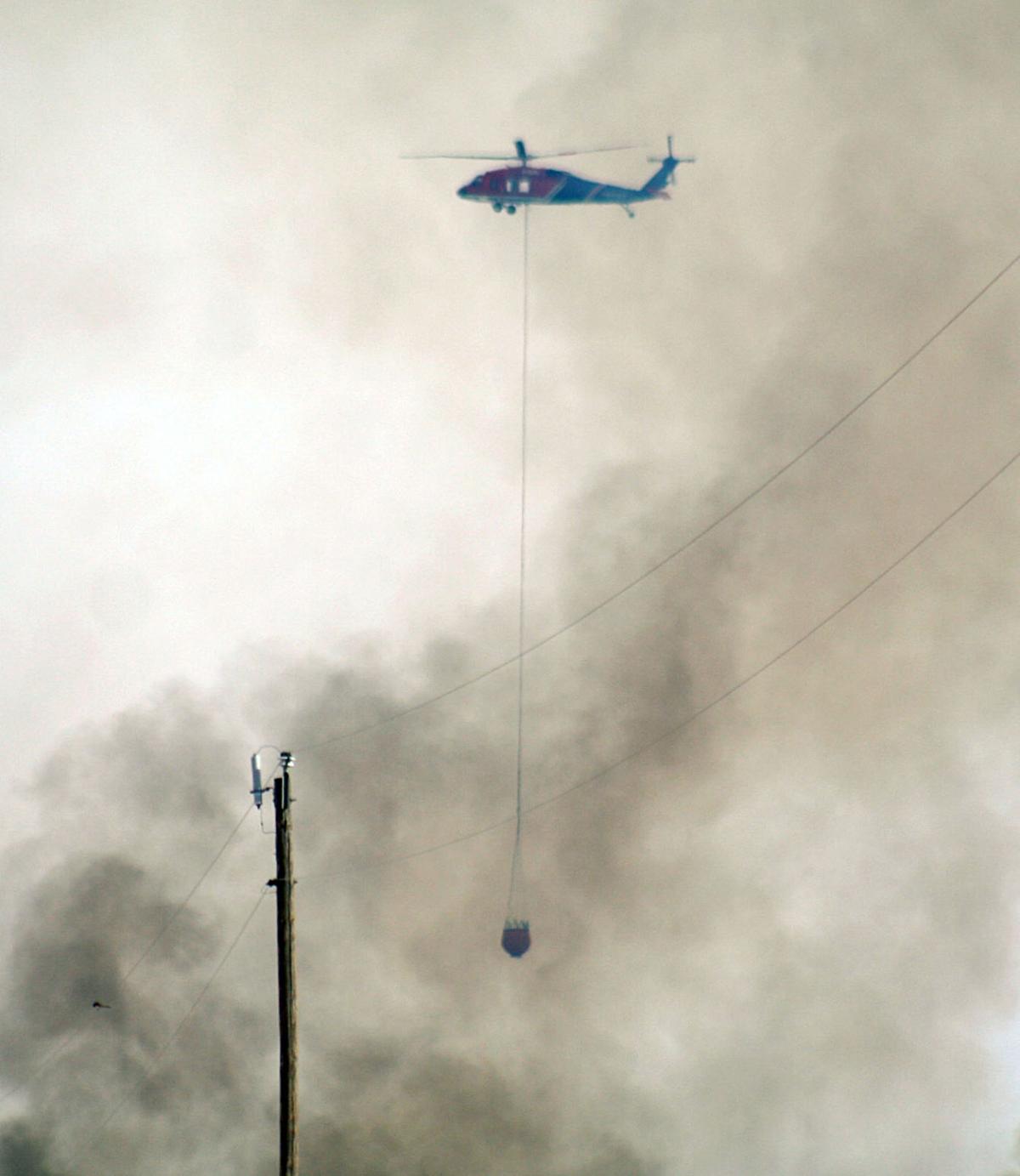 A helicopter moves in through the smoke to drop water on a wildfire north of Woodward Friday morning. (Photo by Rachael Van Horn)

Fires were burning across much of western Oklahoma on Thursday evening.

A look at the fire by Vici. (Photo provided by Marty Logan, news9.com)

Some of the damage from the fire north of Woodward.

A helicopter moves in through the smoke to drop water on a wildfire north of Woodward Friday morning. (Photo by Rachael Van Horn)

Update: Just in. The junction of US Highway 60 and state highway 34 south of Vici is currently closed due to smoke and wildfires according to the Oklahoma Highway Patrol.

More fires were popping up Friday morning across the Woodward area just as an anticipated wind shift from southwest to northwest came through a few hours earlier than expected.

Fire units were being rushed to an area north of Woodward along Highway 270 and NS 199, according to scanner traffic.

There was also a report of a fire in the area of the Woodward airport west of town.

There are also new reports that a missing hunter in Dewey County has been found and has been taken by mediflight to Integris Baptist Medical Center for treatment.

Fires continued in the area overnight and into Friday morning. A fire is still going north of Woodward and in Dewey County overnight areas in Vici were evacuated. The bulk of that fire, officials said, is still southeast of Vici.

There were also evacuations in the Mutual and Camargo areas during the night.

The fire near Vici reportedly reached the edge of the town.

All roads in the area remain open, but it would be a good idea to avoid fire areas as much as possible because emergency vehicles will be going up and down the roads.

There are news reports that deputies are searching for a missing hunter in Dewey County in the Lenora area. There were four people hunting and three were rescued. One remains missing, authorities said.

Reports are around 20 to 25 structures in Woodward County were burned.

While there are no official reports, it appears likely some livestock has been lost during the fires.

Northwestern Electric was reporting around 1,700 power outages in the area Friday morning and a number of poles have been reported down. Most of the outages are south and east of Vici and some north of Woodward.

The area has received an emergency declaration, officials said.

As predicted, a spate of extreme fire weather has caused wildland fires throughout the area Thursday.

At least two large fires touched off south of Woodward, but crews were busy across the state.

Both fires were moving rapidly to the north and northeast.

People in those areas were being urged to get out of the way of the fire as soon as possible.

No injuries have been reported as of 7 p.m., officials said.

Officials said the Reger Hill fire has moved into the Chain Ranch area late Thursday afternoon. By early evening on Thursday the fires were rolling toward Highway 50 which could eventually affect the Alabaster Caverns and Freedom areas.

Emergency alerts were going out and at the request of Woodward Emergency Management, the National Weather Service issued a fire warning for the area Thursday afternoon.

Thursday evening the Red Cross was in the process of setting up a shelter at the Faith United Methodist Church in Woodward, 14th and Texas.

There were reports of several structures that have been involved in the blazes.

Units were being called in from across western Oklahoma and parts of Kansas and the Oklahoma Forestry Department was heading to the the scene. Some heavy aircraft out of Abilene, Texas were also being deployed, officials said.

High temperatures, including 96 degrees at around 2:30 p.m. and winds gusting around 30 miles per hour, led to the increased risk.

Around 5:30 p.m. on Thursday another fire was reported in the Sharon area that was leading to evacuations as some homes were threatened. A fire weather warning was also issued late Thursday for an area some four miles southwest of Woodward to evacuate.

Aircraft was called in to attack the fire from the air and progress was being made in attempts to keep it from crossing Highway 270 in the Indian Creek area.

Another evacuation warning was being issued for the Alabaster Caverns area around 6:30 p.m. on  Thursday.

A large fire was also continuing in the Leedey area, stretching fire resources even more thin.

There were also fires in other parts of the state.

Oklahoma Forestry firefighters were on hand, as well as equipment assets in the Mutual area, including fire fighting aircraft and bull dozers, according to an information release from the Oklahoma Department of Agriculture, Food and Forestry. That early deployment this week included OFS Wildland take forces.

Firefighters from Dewey, Harper, Woods, Major, Woodward and Ellis counties were called to assist in the the southern blazes, then some were moved north.

The first call came in around 12:30 Thursday afternoon for a fire located near the intersection of County Road 215 and U.S. 270, about 15 miles south of Woodward.

At around 1 p.m., another call came in for a fire between Leedey and Putnam in Dewey County, diverting some fire fighters from the first blaze to the other.

At around 2:25 an aircraft hovered over the first blaze with a load of fire retardant, according to radio chatter.