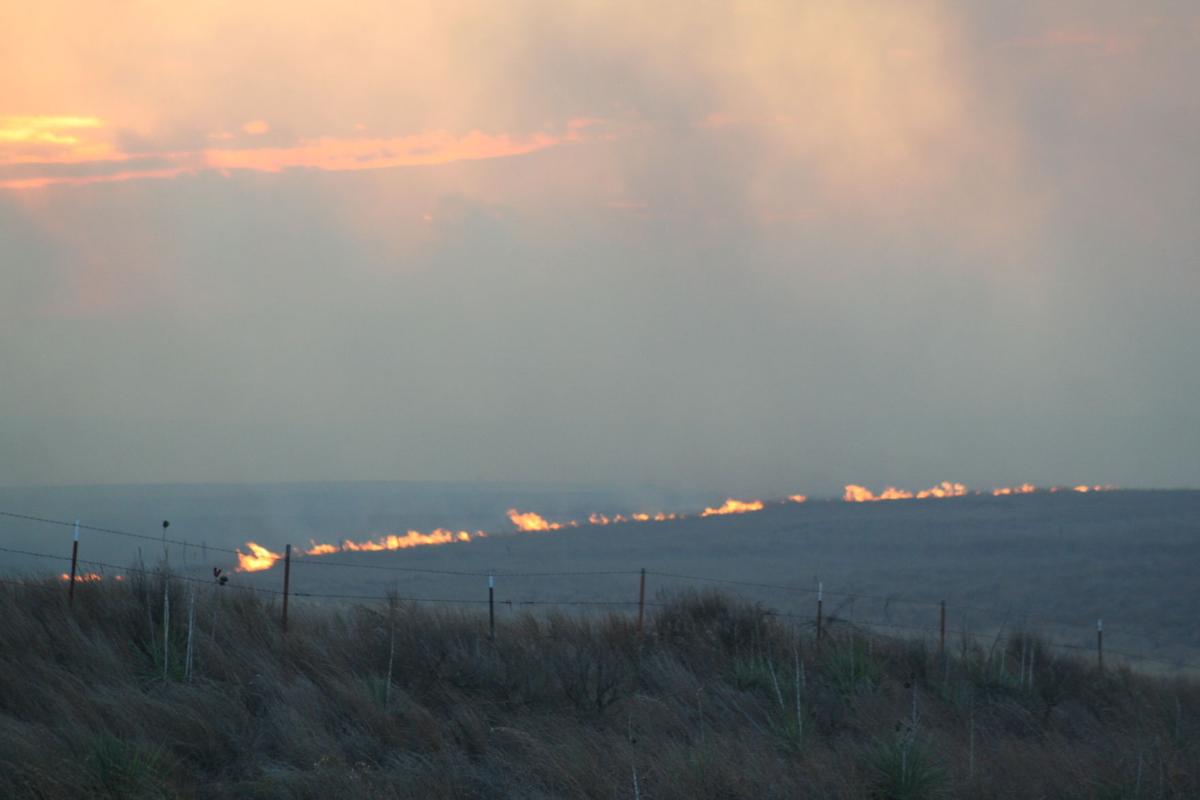 Scene from a wildfire in Fargo Tuesday afternoon. (Photo by Dawnita Fogleman) 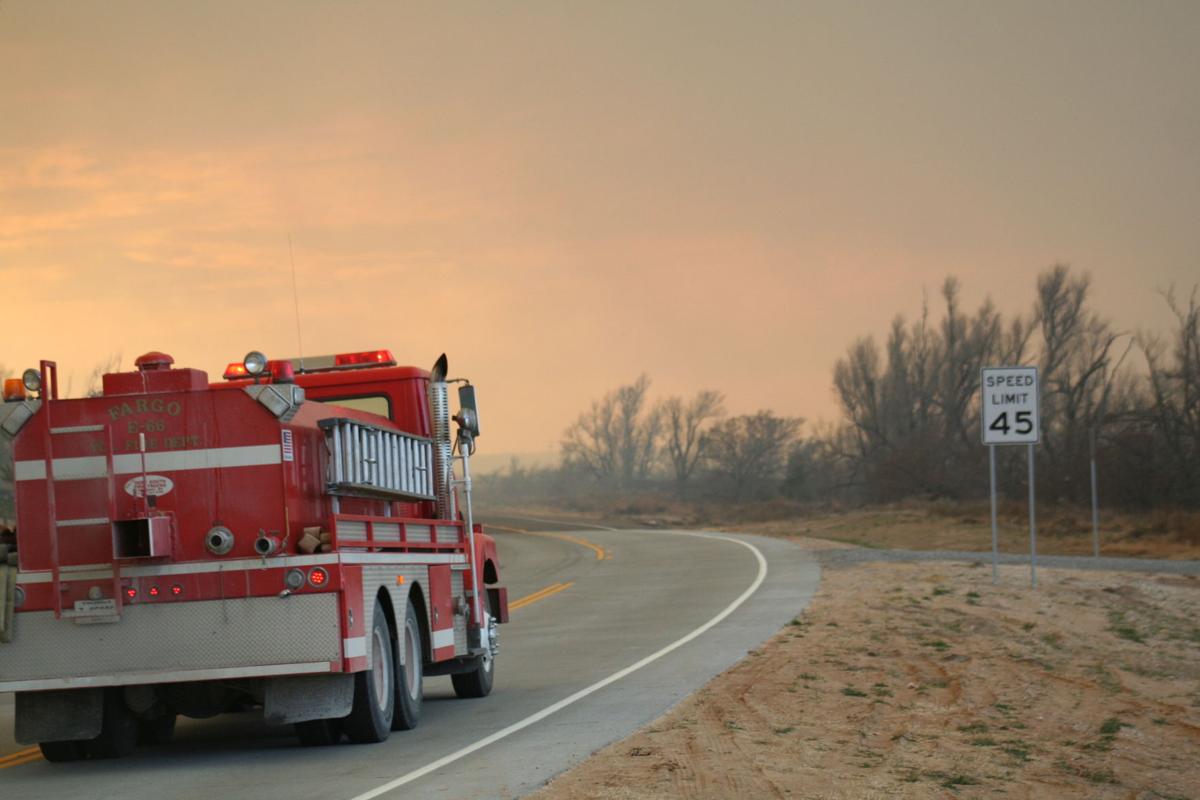 Damage assessment is ongoing for Tuesday’s wildfire northeast of Fargo. The entire community was evacuated, according to Emergency Management Director Lt. Matt Lehenbauer. "We've got a good chance of precipitation coming tonight,”  Lehenbauer said. “This moisture will definitely help because there's some areas that were difficult put out, especially over in Fargo around Wolf Creek. A lot of that buggy and very, very wet muddy. Firefighters are just kind of monitoring the embers and the smoldering areas." (Photo by Dawnita Fogleman)

Scene from a wildfire in Fargo Tuesday afternoon. (Photo by Dawnita Fogleman)

Damage assessment is ongoing for Tuesday’s wildfire northeast of Fargo. The entire community was evacuated, according to Emergency Management Director Lt. Matt Lehenbauer. "We've got a good chance of precipitation coming tonight,”  Lehenbauer said. “This moisture will definitely help because there's some areas that were difficult put out, especially over in Fargo around Wolf Creek. A lot of that buggy and very, very wet muddy. Firefighters are just kind of monitoring the embers and the smoldering areas." (Photo by Dawnita Fogleman)

“We were very concerned about the town of Mooreland,” Emergency Management Director Lt. Matt Lehenbauer shared. “The fire came right up into yards on the southwest side.”

According to Lehenbauer, more than 764 acres burned just outside Mooreland Tuesday. White Horse Ranch Rehabilitation Center and outbuildings were damaged or consumed in the fire.

“We're giving a lot of praise to the management and staff there for rapid response in this. As well as a thank you to the Woodward hospital for hosting them and taking care of the patients,” Lehenbauer said. “That was an impressive feat. (Thank you to) EMS and the school district, for Woodward and Mooreland and Woodward County EMS, and all the other folks that helped out.”

According to Mooreland Town Administrator Bobby Kehn, getting Heritage Manor evacuated was a team effort. Mooreland Police Department and the Woodward County Sheriff’s office helped as well as the schools and ambulance services.

“It was absolutely a cooperation between the Woodward Public Schools and the Mooreland schools. And we would not have been able to evacuate the Heritage Manor without their help,” Kehn said. “Waynoka also sent a couple of ambulances that really helped. It very much was a team effort.”

The Oklahoma Forestry Department pre-deployed to the area the day before, according to Lehenbauer.

“If they weren't here, we would have probably lost a good portion of that community,” Lehenbauer said. “Due to them and the number of firefighters that got here rapidly… We were sure fortunate to have that.”

Lehenbauer said they are reaching out to the Governor's office, telling them how much that assistance means to the area. In high winds and volatile fire conditions, a timely response within the first 15 to 30 minutes is critical.

“It is costly to pre-deploy,” Lehenbauer said. “We've been working this morning, hoping that we don't see budgetary cuts in that area.”

While all 12 girls and the staff are fine, two of the horses are being transported to Oklahoma State University veterinary department in Stillwater for treatment. Smith said monetary donations to help pay the vet bill would be appreciated. Frontier Rodeo out of Freedom came and got most of the horses. Supplies will need to be replenished for the horses.

“We lost our stud barn, so we need another barn for the stud. We need horse panels. We need everything for horses, like the horse halters, the lead ropes, any kind of horse medication,” Smith explained. “We have a few horses with eyes swollen shut, which are being taken care of.”

According to Smith, the whole house is flooded from the water the firefighters used to extinguish the flames. Once the insurance adjuster inspects the place, they will need all hands on deck. All mattresses and bedding will have to be replaced.

“We won't be able to be in there for at least a couple of weeks. Hopefully by Christmas, but at this point in time we're not a hundred percent sure when we'll be back in there,” Smith said. “Right now we have an immediate need of two freezers.”

Smith shared that they had gone grocery shopping right before the fire and were able to salvage some of it. Donations can be dropped off at the White Horse Ranch outpatient offices at 209 Main Street across from the City Hall in Mooreland.

“It's just, it's devastating,” Smith shared. “The community has been amazing, from Arkansas to Texas. Our liaison development director came from Oklahoma City today was just a cartfull of donations from up there. And so, it has been amazing.”

According to the Oklahoma Forestry Services on Wednesday morning, the damage assessment is ongoing for the Fargo fire in Ellis County with an estimated 4,500 acres burned and only 20 percent contained.

A good chance of precipitation should extinguish the rest of it, according to Lehenbauer. He said firefighters are monitoring the embers and smoldering areas.

“The main thing for people to keep in mind, our season starts after the first freeze,” Lehenbauer cautioned. “We've had these early spring fires, but before that, it seemed like we had more fires in the fall. So anytime that you see high winds and it's extremely dry, definitely go overboard with safety precautions regarding fire prevention, (it's) all we ask.”

Lehenbauer admitted that despite caution and planning ahead, sometimes there’s nothing that can be done to prevent wildfires.

“Acts of God can cause these, whether it be from power lines or lightning or whatnot,” Lehenbauer said. “Call them in immediately. The faster we can get there, the better. If you see smoke plumes or you see flames, call it while it's small. Don't wait.”