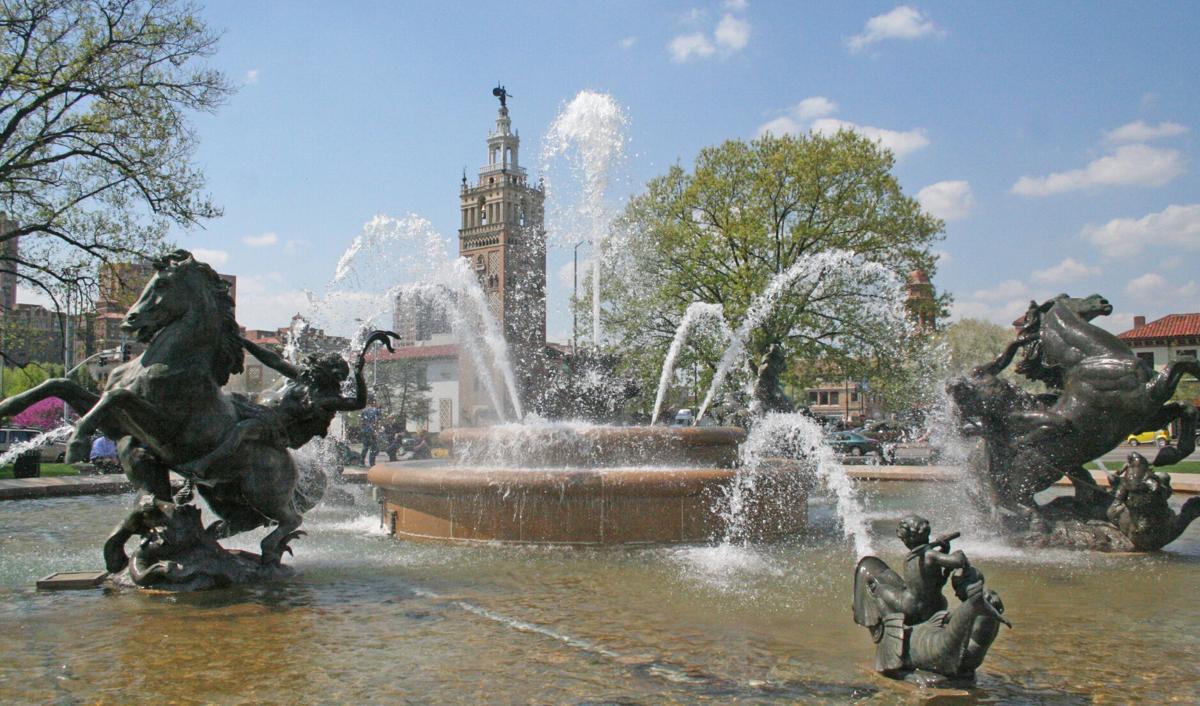 Kansas City’s most notable fountain once graced the estate of a New York millionaire. 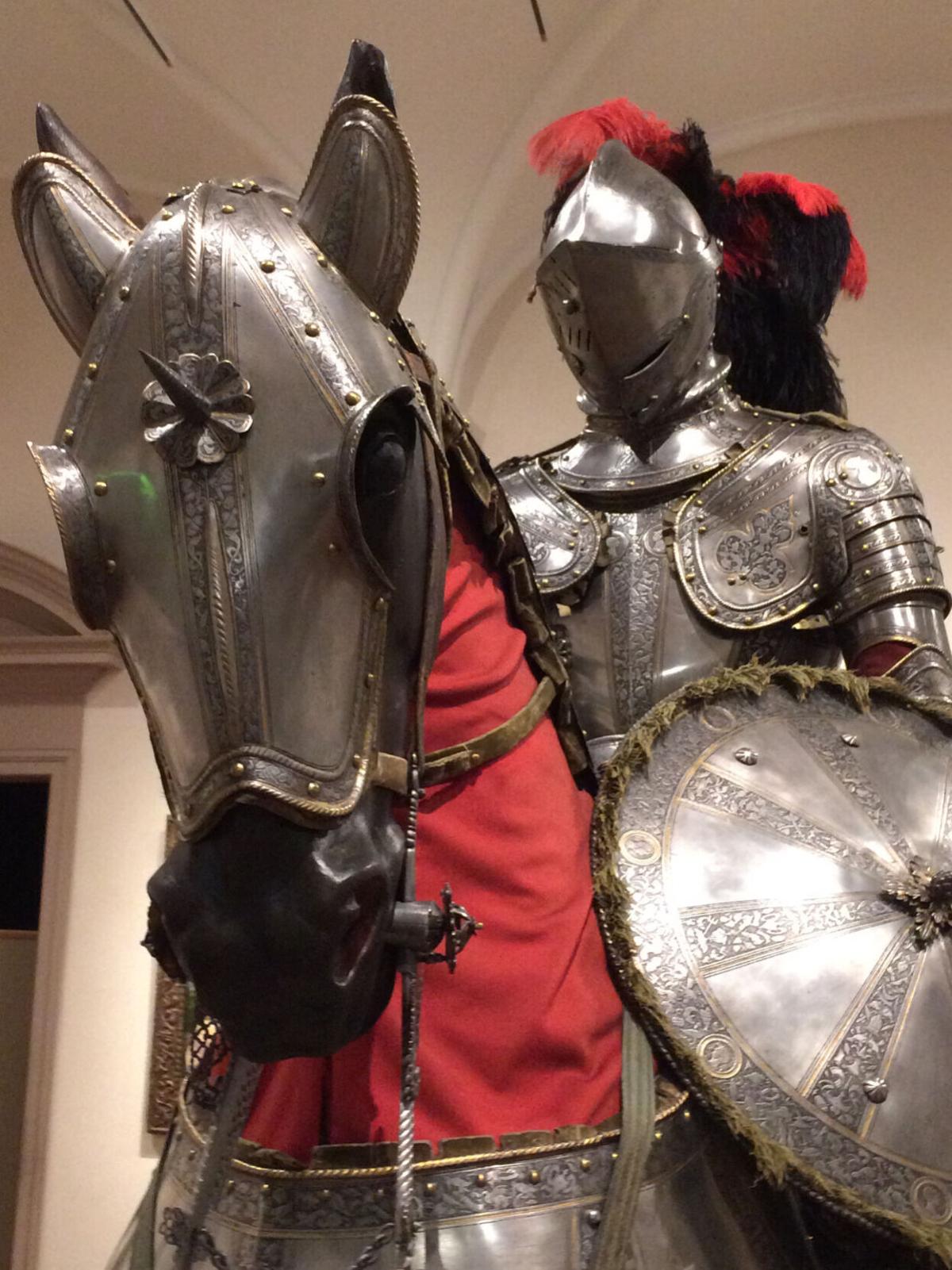 European armor for a man and horse (circa 15th or 16th century) is on display at the Nelson-Atkins Museum of Art. 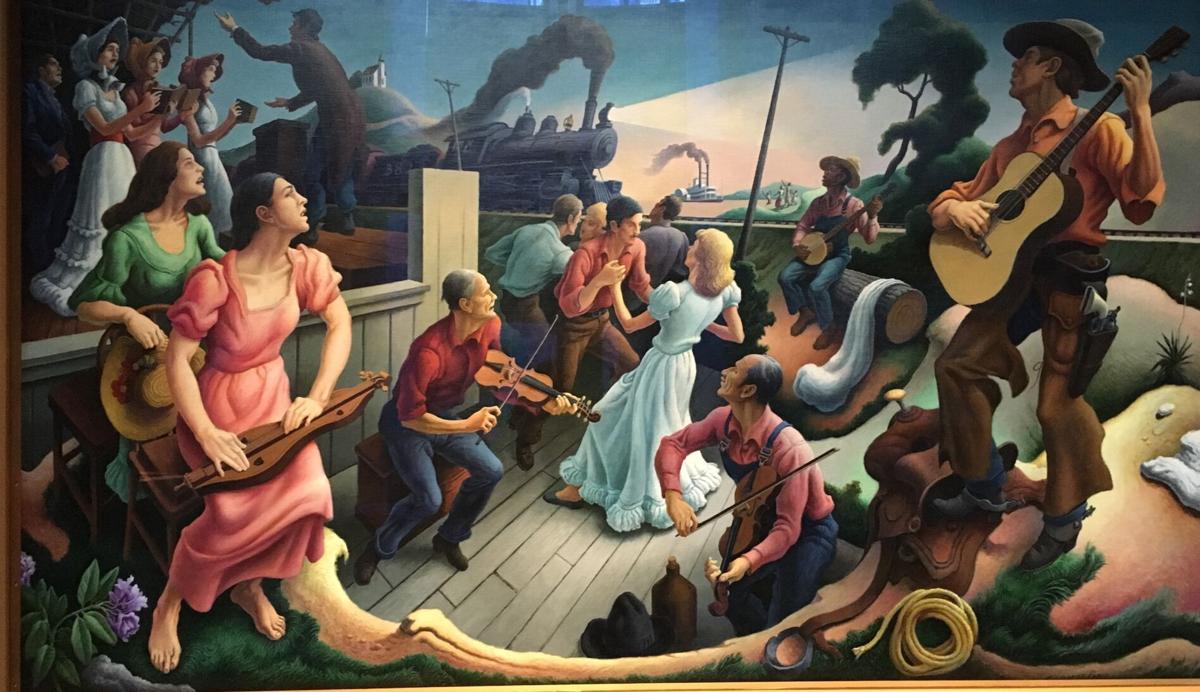 Missourian Thomas Hart Benton’s last painting was “The Origins of Country Music” for the Country Music Hall of Fame in Nashville. 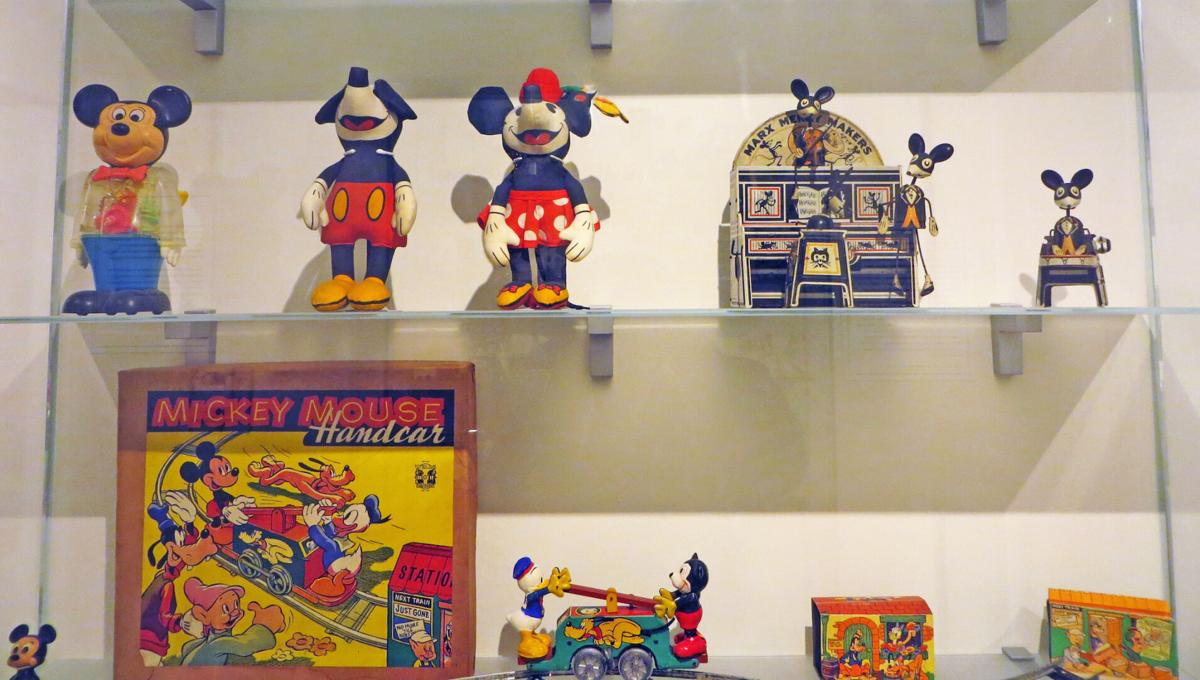 Exhibits like this one of Mickey Mouse show the evolution of some favorite toys at the National Museum of Toys and Miniatures. 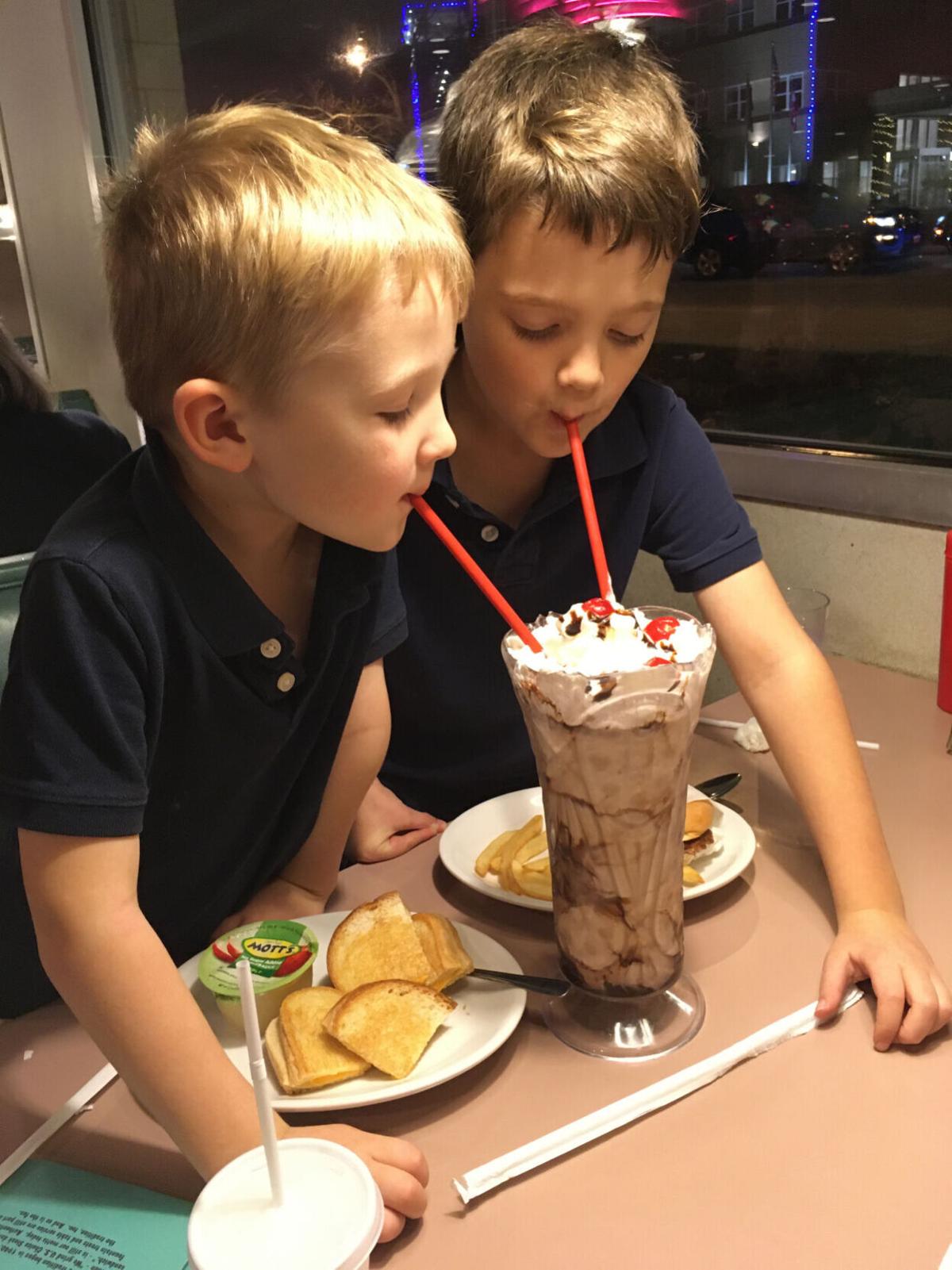 Winstead’s Skyscraper sodas and shakes should be shared. They can serve up to six people. 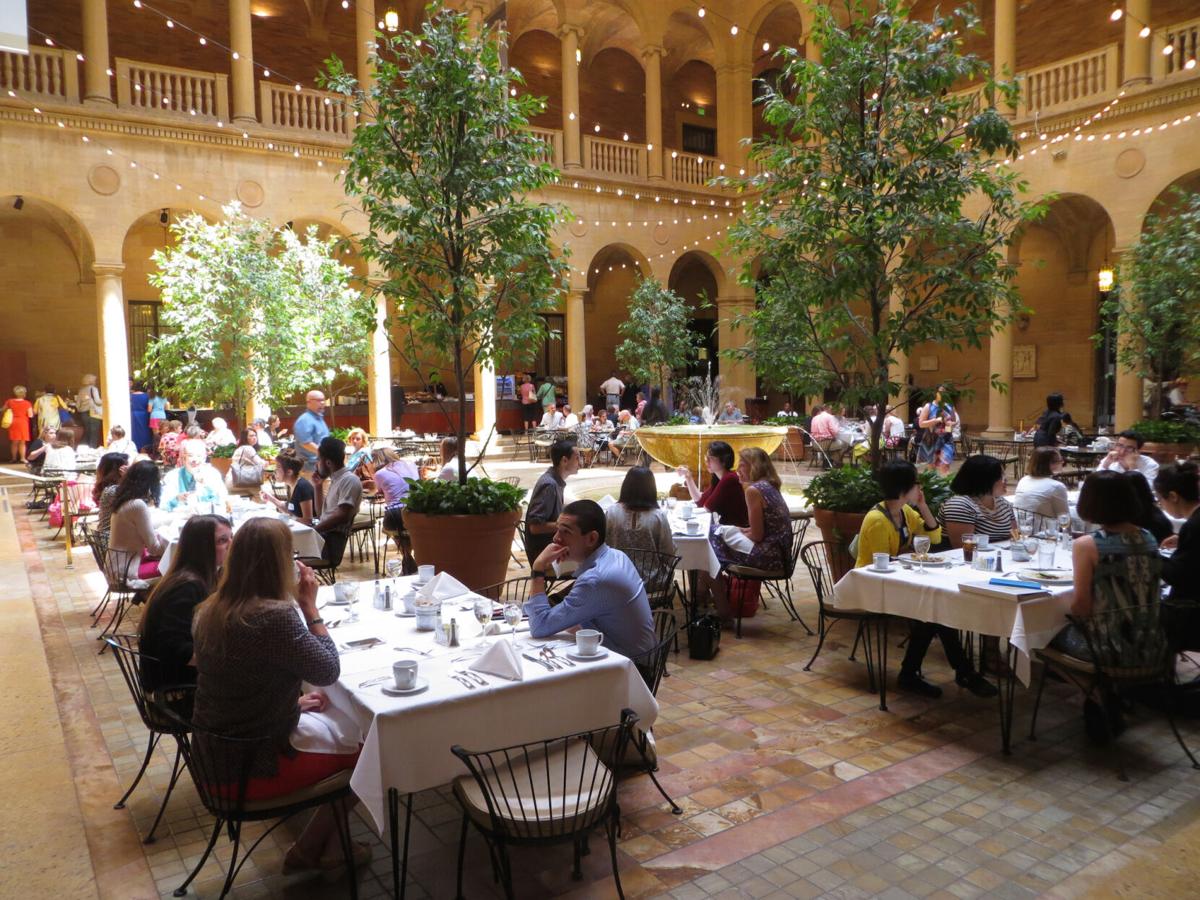 The Rozelle Court, a recreation of a 15th century Italian courtyard, is a nice place for lunch in the Nelson-Atkins Museum of Art 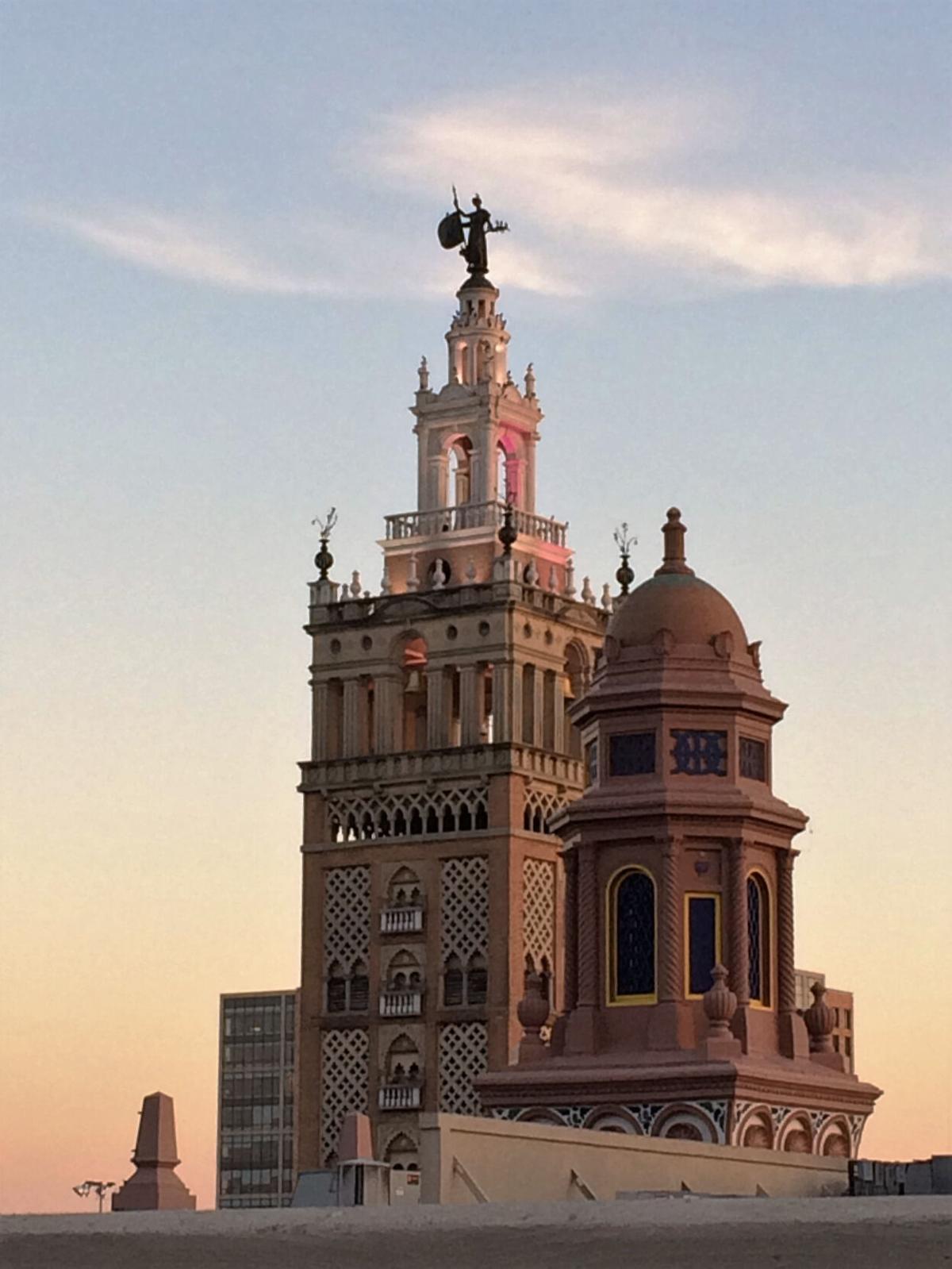 The Plaza’s towers create a beautiful picture against the sunset.

Kansas City’s most notable fountain once graced the estate of a New York millionaire.

European armor for a man and horse (circa 15th or 16th century) is on display at the Nelson-Atkins Museum of Art.

Missourian Thomas Hart Benton’s last painting was “The Origins of Country Music” for the Country Music Hall of Fame in Nashville.

Exhibits like this one of Mickey Mouse show the evolution of some favorite toys at the National Museum of Toys and Miniatures.

Winstead’s Skyscraper sodas and shakes should be shared. They can serve up to six people.

The Rozelle Court, a recreation of a 15th century Italian courtyard, is a nice place for lunch in the Nelson-Atkins Museum of Art

The Plaza’s towers create a beautiful picture against the sunset.

Even though this isn’t the time to travel, it’s a perfect time to plan for future trips. High on my list is my old hometown, Kansas City.

For those unfamiliar with this bi-state beauty, the metro area is made up of Kansas City, Missouri, Kansas City, Kansas, and a variety of suburban cities. Growing up on the Kansas side, we were always kind of the kid brother.

There was no state of Kansas when Kansas City, Missouri, was incorporated. The town’s name was chosen because it was situated at the mouth of the Kansas River, where it merges into the Missouri River.

In my experience, those of us born on the west side of the state line never say we were born in Kansas City, Kansas. We just say Kansas City and hope no one will ask.

That’s not fair to today’s KCK, which, with the Kansas suburbs, offers lots of attractions. But it wasn’t that way when I was growing up — and, going back, I head for some of my old favorites on the Missouri side.

Known as the “City of Fountains,” the city is only surpassed by Rome for the number of watery wonders.

My personal favorite is a beautiful fountain just east of the Country Club Plaza shopping district. Created in Paris in 1910, it features four larger-than-life horses and riders said to represent four famous rivers: the Mississippi, the Seine, the Rhine and the Volga.

It was brought to Kansas City in the ‘50s by the Plaza’s developer, J.C. Nichols. Nichols was responsible for some of Kansas City’s most beautiful residential areas and the Plaza, the nation’s first shopping area created for automobile traffic in the 1920s.

The fountain, once named the J.C. Nichols Memorial Fountain, is in the process of being renamed. As powerful and creative a developer as he was, Nichols also was a racist whose properties were off-limits to a large portion of the city’s population.

There’s so much to see and do in Kansas City, this article is just Part 1. I’ll concentrate on several — though not all — of the attractions in and around the Plaza area.

Influenced by the towers, tiles and balconies of Spain, the 15-block Plaza reflects an appreciation of Old World art and architecture.

Highlights include the 130-foot-tall Giralda Tower, inspired by the eponymous tower in Seville, Spain, a reproduction of the Florentine Il Porcellino and the Mermaid Pool, whose sea-loving sirens of Carrara marble are over 300 years old.

Growing up in the area, window shopping on the Plaza was a family favorite on summer evenings. A highlight was stopping at Topsy’s Popcorn Shop. Bags of caramel corn in hand, we’d walk and talk and listen to the nighthawks calling from the dark sky.

To this day, when I hear a nighthawk, I’m 10 years old and wondering where my caramel corn is. Topsy’s is still there, along with a number of other tasty venues.

My favorite Kansas City stay is the boutique Raphael Hotel overlooking the Plaza. Its old-fashioned elegance and superior service make it a desirable pied-a-terre.

My reasons for loving it are more sentimental; it’s where my dad and mom would stay when they visited the city.

That, and it’s close to an eatery that is equally dear to my heart: Winstead’s. It was a real treat when my dad would take us to the cute drive-in with its art deco exterior. You could drive through, but we never did.

On every trip to K.C., I look forward to sliding into a turquoise Naugahyde booth and listening to the tunes coming from the juke box.

My order — every time, over the last (cough, cough) years — a double steakburger and a cherry soda. The burgers are high-quality beef with no additives, the patties so thin they’re almost lacy. The ice cream is rich and made locally.

Tip: breakfast is the biggest bargain you’ll find in town. No fancy-schmancy choices, but, like their burgers, everything is top quality and made with lots of TLC.

Even writing this article is a trip down my memory lane. I grew up regularly visiting the magnificent Nelson-Atkins Museum of Art. The old north entrance led into the massive Kirkwood Hall, a huge room flanked by 12 huge, black, white-veined pillars. I fantasized growing up and living there.

I haven’t gotten used to the contemporary Bloch addition to the classic structure, but it provides space for more art and visiting exhibitions.

The Chinese collection is superb. My favorite spot is the Chinese Temple Gallery with its 12th century, polychrome and wood figure Guanyin of the Southern Sea, said to be the finest of its kind outside of China.

The European collection ranges from Middle Ages through the great masters and a nice Impressionist collection. American highlights include paintings from almost-local George Caleb Bingham and the largest public collection of works by Thomas Hart Benton paintings and drawings.

The grounds are extensive and feature a number of sculptures and an interesting glass maze. Plan on a day including lunch in the attractive Rozelle Court. Their chicken salad is a real treat.

North of the Plaza, visit the home and studio of Thomas Hart Benton. His studio is as it was when he died. He was just finishing a small mural for the Country Music Hall of Fame.

When you see that painting in Nashville, you can see that he didn’t complete the painting; there are no telephone wires connected to poles.

South of the Plaza, the National Museum of Toys and Miniatures is a must-see for all ages.

The toy collection is extensive, but it’s the miniature collection that blows me away.

Collected by the daughter of Joyce Hall, founder of Hallmark Cards, the detail and quality of the exhibits is stunning.

For example, one piece, a jardinière, only a few inches high, is made up of pieces of wood as small as an eyelash and took the artist 14 years from commission to delivery.

Most of the exhibits are in a newer part of the building, the front portion of which was a large home owned by a prominent Kansas City businesswoman.

It also was the scene of her dramatic kidnapping. Read the whole story of Nell Donnelly in my book “More than Petticoats: Remarkable Missouri Women.”

You can have an entire vacation just exploring this part of Kansas City. Watch for more later this month.

Funeral Service will be held at the First Baptist Church in Laverne, OK on Saturday, January 23, 2021 at 10:00 AM. Place of Burial, Laverne Cemetery